VIBES uses Frequency Based Substructuring (FBS) to build up the transfer path of complex systems. FBS is the most versatile and cost-effective method for early-phase NVH engineering. It uses Frequency Response Function (FRF) descriptions of subsystems that can be obtained in various ways. Vehicle-chassis parts can be modeled numerically using standard FE simulation, whereas FRF models of complex active components (such as engines and mechatronic parts) are obtained by test-based modeling using DIRAC. Describing the component interfaces using 6-DoF Virtual Points (VPs) ensures a proper coupling of numerical/test-based models. Noise Transfer Functions (i.e. NTFs to the driver’s ear) are inserted with the same ease and can be interchanged to simulate different vehicle platforms. With FBS, it is possible to exchange substructures and directly simulate the dynamics of the new system, leaving all other subsystems unchanged.

For example, a Virtual Acoustic Prototype of a mounting concept for an electric air conditioning compressor can be designed to investigate its NVH performance. Between the compressor and the vehicle subframe, there is a carrier isolated by rubber bushings on each side. The FRF of the compressor and the vehicle subframe can be determined separately by test-based modeling in DIRAC, while the FRF of the bracket can be determined numerically.

Blocked Forces can be calculated in SOURCE to describe the compressor’s operational structural excitation independently of the assembly. Finally, the brackets and bushings connecting the subsystems can be identified and inserted into the substructuring procedure as dynamic stiffnesses. Then the entire vibration chain can be built up modularly using COUPLE. To validate the resulting FRFs, a reference measurement on the physical vehicle prototype was conducted: 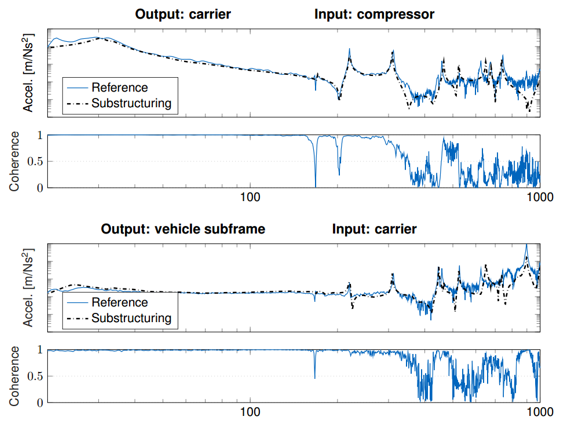 The FRFs resulting from FBS fit well with the reference measurement. At higher frequencies, the input energy applied to the reference system is not sufficient to accurately measure the transfer function. Since all components are modeled individually in FBS, they can be measured with a better signal-to-noise ratio. Therefore, a vibration chain model based on FBS yields better FRFs/NTFs than usually obtained, even with a physical prototype of the assembled system. This allows making predictions in frequency ranges that were previously not possible.

As the whole vibration chain is built up modularly, one can now replace component models and optimize new designs in a completely virtual way – long before any physical prototype is available! Imagine you are testing the compressor mounting concept with four different bushing configurations. Until now, you had to exchange all bushings on the physical prototype and remeasure the entire vibration chain. With FBS, it is possible to exchange only individual component models (i.e. the bushings) to obtain the dynamic behavior of the entire assembly. FBS has been validated and applied in multiple commercial projects which can be found here.

Practical benefits of Frequency Based Substructuring and Virtual Points: