This page discusses some more practical issues related to the Virtual Point experiment setup. Proper positioning of the measurement and excitation points is essential to obtain a high-quality model. Care should be taken to ensure that all 6 DoFs per Virtual Point can be described independently. This has implications for both sensor placement and impact positions.

This discussion is restricted to triaxial accelerometers as they have become standard practice in experimental testing. We recommend the use of base plates on the sensors because they reduce the effect of base strain sensitivity and can prevent electrical noise issues. Although one pair of triaxial sensors measures a total of 6 channels, it usually is not sufficient to describe all the 6 DoFs of the Virtual Point. One linear dependence will appear in the Virtual Point’s DoF as the triaxial sensors are unable to describe the rotation over the axis spanned between both sensors, as illustrated by the following figure: 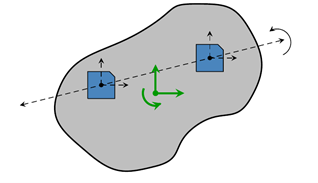 A) Two sensors spanning a line: one dependency exists between the rotational axis. 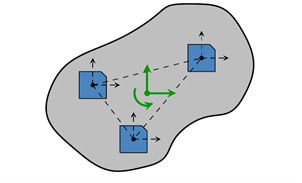 B) Three sensors spanning a surface: all rotations are fully determined.

Therefore, it is necessary to add a third triaxial sensor and place it besides the spanned axis to describe all the 6 DoFs of the Virtual Point. An additional benefit of the third triaxial sensor is the overdetermination of the interface problem. Applying the Virtual Point Transformation reduces the effects of uncorrelated measurement noise and bias errors due to misalignment of the sensors.

Unlike the six accelerations measured by two triaxial sensors, six well-positioned hammer impacts are potentially sufficient to determine the loads of a 6-DoF Virtual Point. Still, it is preferable to use more excitation points and overdetermine the force transformation for the same reason. Therefore, three impacts in each direction (x, y, z) can be used as a minimum. However, it is advised to excite at more locations.

Care should be taken to include excitation directions that do not point straight to the Virtual Point to generate a “moment” along the rotational axes. Besides that, we do not suggest impacting the faces of sensors, as FRFs obtained at the sensors’ faces exhibit poor coherence, and the sensor is easily driven in overload. The Virtual Point Transformation allows exciting at locations other than the sensor.

Concerning the distance of impact points from the Virtual Point, a similar approach applies as for the sensors. Position errors are typically in the order of a few millimeters, and to minimize their effect on the transformation, one should excite at some distance from the Virtual Point where the local rigidness assumption is still justified. The local rigidity usually is dependent on the frequency range of interest.

DIRAC offers a 3D viewer in which you can directly place sensors and excitations on the CAD geometry. An exemplary 6-DoF Virtual Point setup is shown in the following picture. 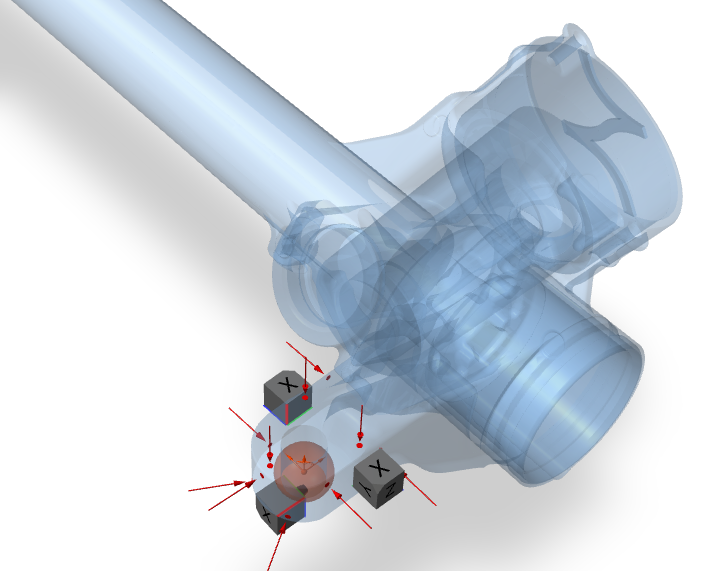 The most important aspects for measuring Virtual Points in practice are summarized in the following table:

3 Evaluating the quality of your model5 Interfaces: 3-DoF versus 6-DoF