Virtually optimizing and selecting the best components to reduce NVH issues can be carried out with Frequency Based Substructuring (FBS) using test data. Applying this method in the early development stage allows OEMs to bridge the gap between the concept phase and the first actual vehicle prototype. With the support of the Eurostars program, VIBES is developing software applications to implement FBS. This article presents a successful implementation of the method on an electric drivetrain. The entire project has been conducted in collaboration with BMW. The full paper can be found here.

The investigation aims to verify whether FBS can be used to accurately predict the NVH performance of an electric vehicle, taking into account the noise and vibrations produced by the electric drive unit. The results obtained using substructuring will be compared with validation measurements of the assembled system.

The component analyzed is an electrical drivetrain. In the assembly, 3 subsystems can be distinguished: the EDU (Electric Drive Unit), the RAC (Rear Axle Carrier), and the TMB (the bodywork or “trimmed-body”). A total of 8 coupling points can be identified: 4 of them connect the EDU to the RAC, and the other 4 connect the latter to the trimmed body. The following figure shows the original full-vehicle assembly, for which operational run-up measurements have been conducted. In the figure, it is possible to see the three-stage FBS model: here the assembly is visualized as a chain of the 3 subsystems and the 8 coupling points.

The dynamic behavior of each subsystem shown in the figure is experimentally obtained using the software DIRAC. The dynamic stiffness of the rubber mounts is calculated with the inverse substructuring method. The components are then coupled using the compliant FBS coupling technique. This is the case because the rubber bushings that connect the subsystems are made of flexible material with negligible mass.

The active excitations of the EDU are described with blocked forces, which are obtained using the so-called free velocity method. The blocked forces are later applied to the coupled system. The results of the FBS analysis are then compared with the measurements of the assembled system as validation.

To create a full vehicle model using FBS, the dynamic behavior of each subsystem is needed. The model of each component has been obtained through impact testing in a free-free configuration. This means that all the components have been either freely suspended or placed on air springs to have the interface Degrees of Freedom (DoFs) free to displace.

An example of the VPT FRFs of the rear axle carrier in DIRAC is shown in the following figure. 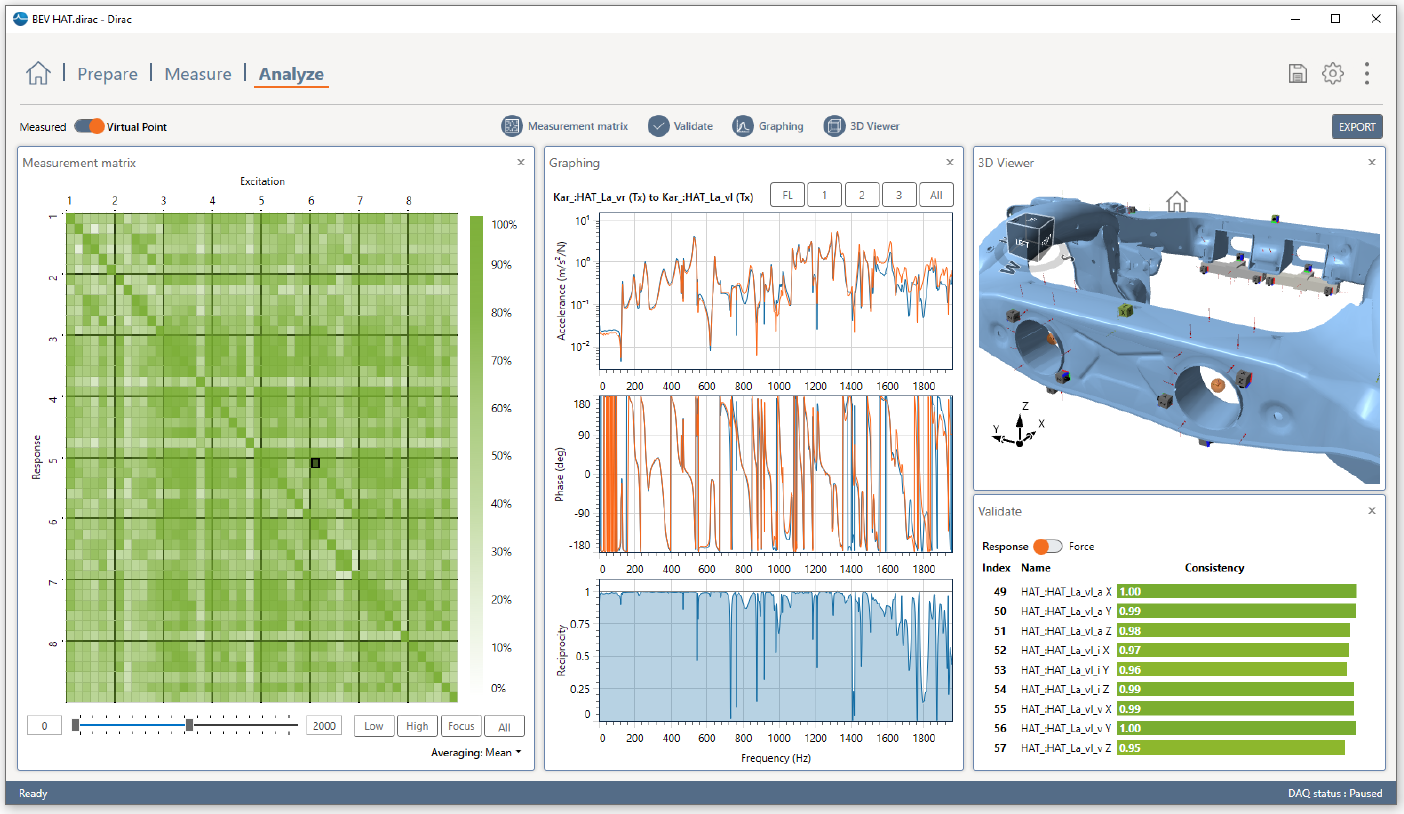 The Virtual Point FRF matrix of the 8 coupling points of the rear axle carrier.

Each Virtual Point has been described with 6 DoFs (3 translations and 3 rotations).

After obtaining the test-based models of the three subsystems, it is necessary to characterize the rubber bushings. A combination of DIRAC and the VIBES Toolbox for MATLAB is used for the mounts modeling.

Aluminum transmission simulators have been machined to fit tightly to the rubber bushing cylinder and its ends. A total of 14 triaxial accelerometers have been glued, and 37 impact positions and 2 Virtual Points (with 6 DoFs each) have been defined in DIRAC. The complete design of experiment made in DIRAC can be seen in the next figure. 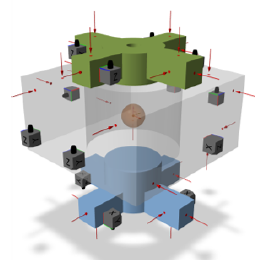 Model of the rubber bushing in DIRAC. Source: link

After impact testing, the 12×12 Virtual Points transformed matrix $$\mathbf{Y}_{\mathrm{qm}}(\omega)$$ is calculated and inverted to obtain $$\mathbf{Z}^{\mathrm{mnt}}(\omega)$$ which is the dynamic stiffness matrix of the assembly (mount and transmission simulators).

The inverse substructuring technique has proven that the off-diagonal blocks of the dynamic stiffness matrix approximate the dynamic stiffness of the mount only. This is valid up to the first internal resonance of the mount. The bushing stiffness obtained with the inverse substructuring method has been compared with the data provided by the mount supplier. From the following figure, it can be seen that the curves align well. 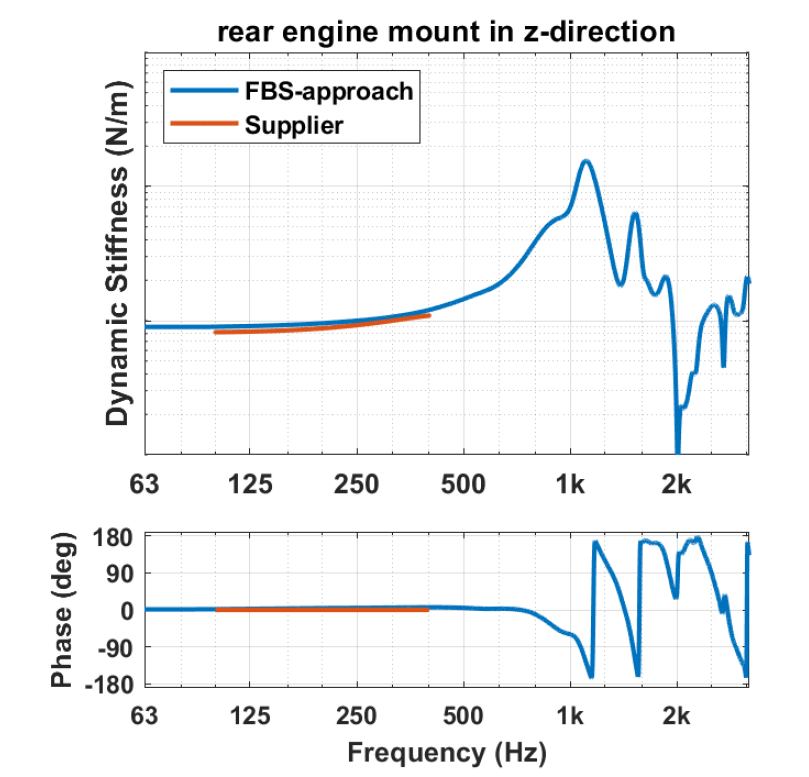 Comparison of bushing stiffness provided by the supplier and calculated with inverse substructuring. Source: link

The bushing stiffness obtained with inverse substructuring is later used when the components are coupled to obtain the substructured vehicle model.

Directly measuring the internal forces produced by the EDU is not possible. For this reason, a set of equivalent forces $$\mathbf{f}_2^{\mathrm{eq}}$$ (also called blocked forces $$\mathbf{f}_2^{\mathrm{bl}}$$) are used. They are an inherent property of the EDU itself (independent of the receiver). When applied at the interface of the assembled system, they produce on the passive side the same response that the internal forces would cause.

where  $$\mathbf{Y}_{\mathrm{22}}^\mathrm{A}$$ is the dynamic stiffness of the drivetrain at the active side interface and $$\mathbf{u}_2^{\mathrm{free}}$$ are the operational accelerations. In addition, to validate the results at the end of the project, operational measurements of the engine attached to the full-vehicle are performed. For the purpose, sound pressure levels ($$\mathbf{u}_6^{\mathrm{val}}$$) at the passengers’ ears are recorded with microphones.

For this case, the main equation of LM-FBS is built up assembling the 3 matrices of the subsystems as follows:

And B is the Boolean compatibility matrix:

In the current case, however, the three subsystems are connected through flexible rubber bushing, and therefore, the compliant coupling technique could be the best technique to use. This fact has been investigated comparing the FRFs of the components at the engine side and after the bushing, as shown in the following figure.

FRFs of the EDU and RAC before and after the bushing.

It can be observed that up to about 16 Hz, the EDU and RAC transfer functions overlap, which means that the two components and the mount behave as a rigid body. After that frequency level, the curves start deviating one from the other, and the flexibility of the rubber bushing starts playing a role.

Snapshots of the operational deflection shape of the EDU and the RAC at 40 Hz.

The compliant LM-FBS coupling for this application has been performed in the VIBES Toolbox for MATLAB.

To verify the accuracy of the substructured model, the FRFs of the coupled EDU and RAC $$(\mathbf{Y}^\mathrm{A + B+C})$$ are compared with the data of the assembled EDU and RAC that have been previously measured with DIRAC. The results can be seen in the next figure. Here, the accelerance and phase of the FRFs at the engine side (left) and after the bushing (right) are shown. 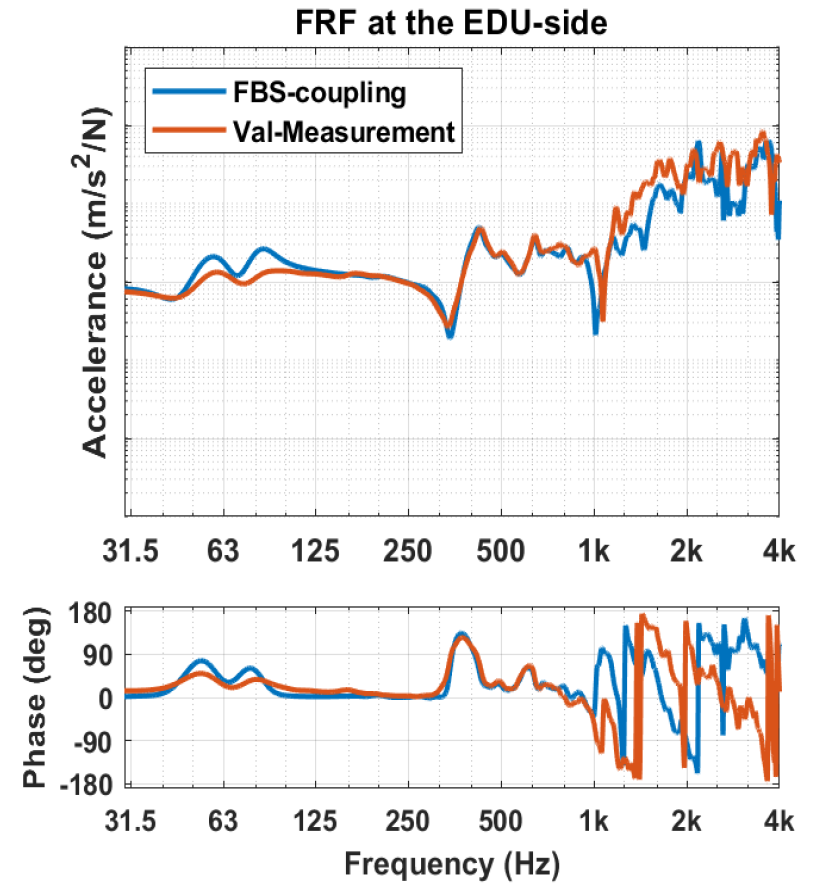 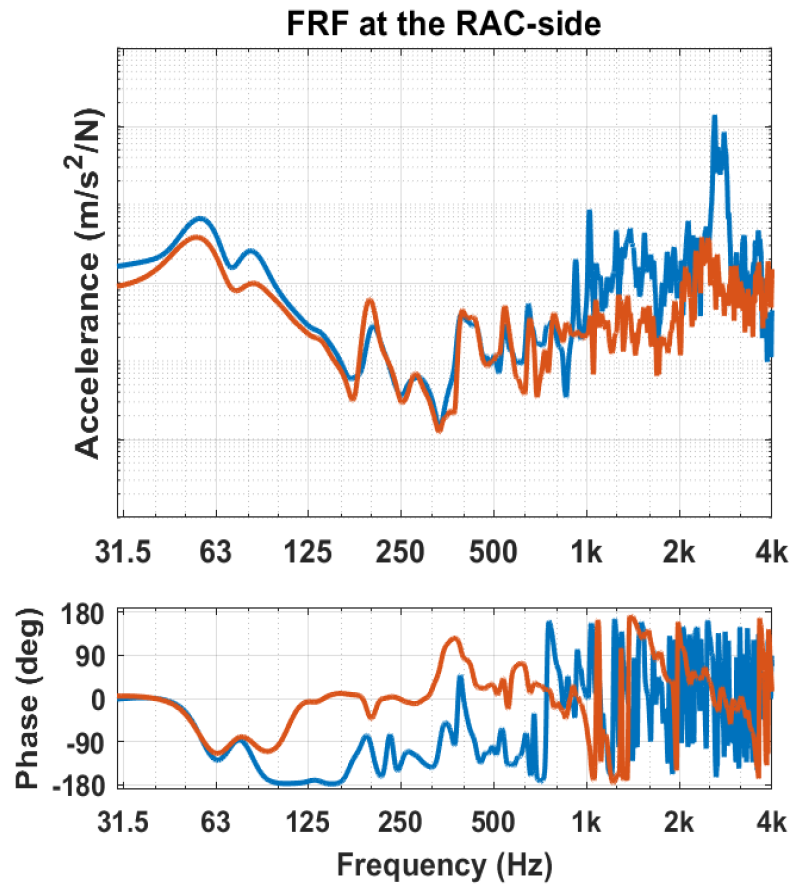 Validation of the coupling of the drive unit with the rear axle carrier. Source: link

Looking at the left figure, it can be noticed that the two curves overlap quite well up to 1 kHz. Also after the mount (right figure) the two curves match, but deviations at higher frequencies are present. The cause of the mismatch could be either minor positioning errors in the measurements or some numerical effects during coupling.

It can be concluded that the compliant coupling with the simplified bushing models performs well in the current situation.

After validating the engine’s coupling with the rear axle, the last subsystem (trimmed body) is added. At this stage, the substructured full vehicle model ($$\mathbf{Y}^\mathrm{full \; vehicle}$$)  is available.

Component-based TPA / Applying the excitations to the substructured model

In the next step, the blocked forces are applied to the full-vehicle model that has been built using FBS ($$\mathbf{Y}^\mathrm{full \; vehicle}$$ ) and the resulting sound pressures at the microphones placed at the passengers’ ears locations ($$\mathbf{u}_6$$) are calculated using the formula

The results are compared with the validation measurements performed with the engine attached to the full-vehicle ($$\mathbf{u}_6^{\mathrm{val}}$$). The following figures show respectively the Campbell diagram of the measured sound pressure levels and the predicted ones at the passengers’ ears.

The two plots show a good match between measurements and predictions up to 500 Hz. At about 850-900 Hz, the model obtained through component TPA and substructuring presents a mismatch in the coupled FRFs. Overall, the two diagrams show the same pattern except for the mismatch. 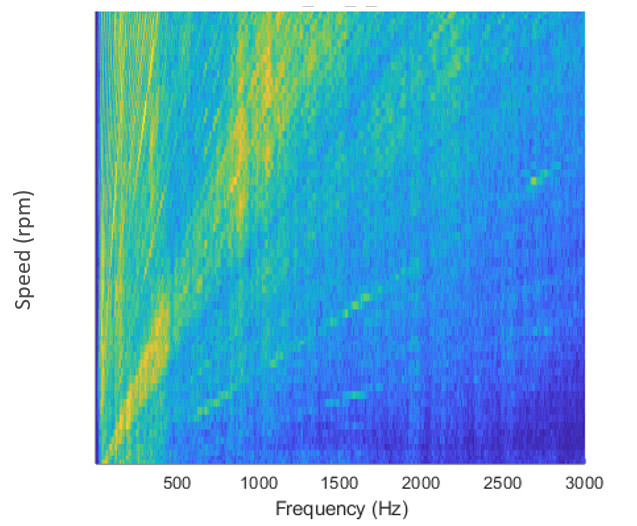 Campbell diagrams of the measured and predicted sound pressure levels at the microphone’s positioned at the passengers’ ears.

It can be concluded that the full vehicle model built with frequency based substructuring performed well in the component TPA carried out in this project.

This project proved that FBS is an excellent solution to obtain full vehicle models starting from single components. It has also been demonstrated that the dynamic stiffness of rubber bushings calculated through inverse substructuring matches with the mounts data provided by the suppliers.

The benefits of using FBS are listed:

The shown methods of frequency based substructuring and mount stiffness characterization with inverse substructuring were applied and validated within the scope of a project with industry partner BMW. VIBES likes to thank our partner for providing the opportunity to apply and prove our methodology and to publish the results within a case study.

Maarten is responsible for the technology within VIBES. He co-founded VIBES after doing his PhD research at BMW in Munich.

Eleonora holds a MSc. in Aerospace Engineering. After gaining experience at Audi and Daimler, she joined VIBES to improve our sales.