Blocked Forces have made a big upswing as source characterisation method in the past few years. OEMs are pushing this method through in component specifications and as a result, suppliers are answering to this trend by obtaining this competence and implementing this in their respective workflows. High quality blocked forces rely deeply on high quality test models, which is where DIRAC makes a real difference. A great example is the one of ZF, a well-established German automotive supplier and how they prepared for Blocked Forces in a collaboration project.

The purpose of this project for ZF has been straightforward. Getting prepared for future requests on blocked forces by means of a general investigation. This general investigation has covered the applicability of blocked forces, as well as different Transfer Path Analysis (TPA) methods in a more general sense.
As a result, three scope items were defined for this project. Each contributing to the overall picture of these methods:

The Electromagnetic Roll Control (ERC) unit in a vehicle would provide a good testing ground for the above.

Configurations with virtual points including and excluding rotational DoFs – as well as a configuration with only 3-DoF measurement – were combined with operational data having the ERC ‘active’ to obtain blocked forces. The variously obtained blocked have formed the basis for the majority of analyses. Each set was used to synthesise an in-vehicle response for comparison with a validation signal.

The upside of using DIRAC

We used our measurement software DIRAC with a live connection to a PAK MK2 measurement system to generate high-quality component models. As all required quality information was live available, any potential measurement errors could be spotted and solved directly. This allowed for a “first-time-right” workflow resulting in component models with high-quality virtual point information. CAD models of the subframe and ERC were readily available for this project, resulting in a controlled placement of sensors and impact positions for the FRF measurements. Also, preparation of the measurement setup was done in DIRAC on forehand, not wasting valuable measurement time.

In the remaining analyses SOURCE was used. Since both programs have embraced the virtual point technology the transition from measuring to analysis was fast and seamless. Thanks to the flexibility in this process we were able to efficiently set up and compare TPA results using different interface setups (e.g. with and without rotational DoFs). 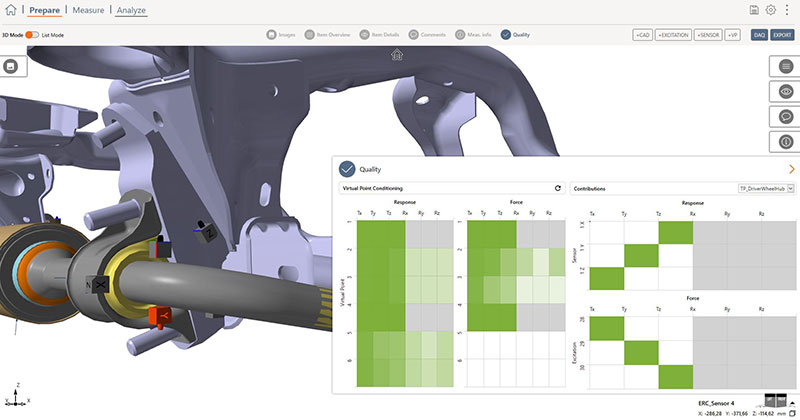 Measuring in DIRAC. The green matric overview is filled with quality indicators

A solid approach towards Blocked Forces

Some valuable lessons were learned during the course of this project. The insights on each of the respective scope items have led to a good physical understanding of the entire vehicle system. Regarding the scope items, the key take-aways were: 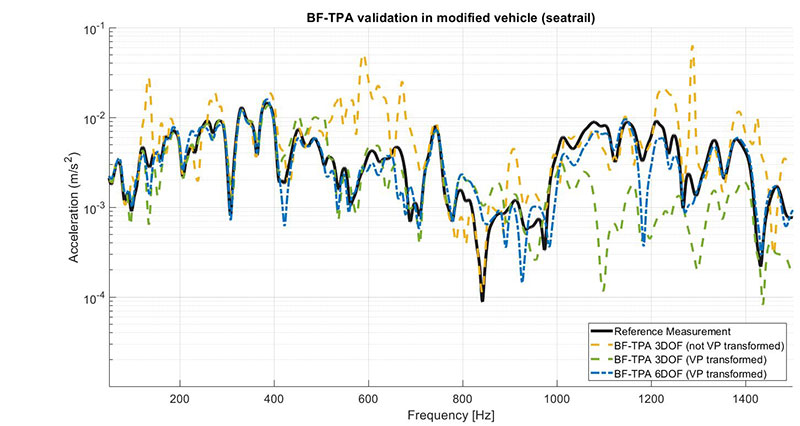 This successful investigation has shown the value of our methods and software. ZF is looking forward to further exploit the benefits of this process with customers per component.

Michael runs operations at the Munich office. He received his BSc. degree in a dual study program with ZF Friedrichshafen and holds a MSc. degree from TU Munich. Before joining VIBES, Michael did his PhD project on Dynamic Substructuring at the TUM in cooperation with BMW Group.