2019 was a year filled with exciting techological projects, collaborating with several key players in the automotive industry. Most projects included aspects such as blocked force source characterisation and Frequency Based Substructuring with test-based models. The use of DIRAC and the VIBES Toolbox made all the difference, both in the success of the projects as well as the speed of measuring and generating useful engeering insights. A good example of this was the project conducted with Magna Steyr, a large automotive supplier based in Graz, Austria. Read more about it in this article.

The main goal of this project was to make a proof of concept of Frequency Based Substructuring and blocked force Transfer Path Analysis for an electric vehicle. For that, we were allowed to apply our methods on a benchmark vehicle which turned out to be a Volkswagen E-Golf. The source of interest was the E-Motor which is mounted with three rubber bushings to the trimmed-body (TMB). One of the challenges was that the blocked force calculation had to be calculated  using a substructured model, rather than from an “in-situ” measured FRF matrix, as the interfaces were not directly accessible in the full vehicle. 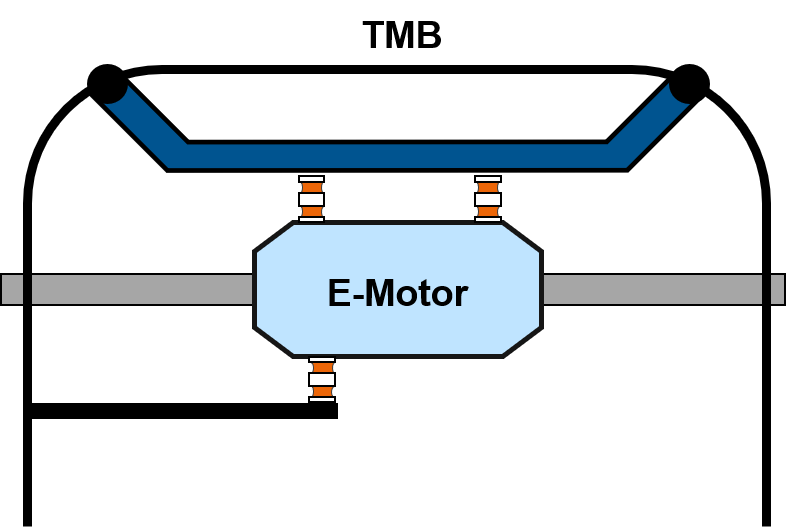 Schematic display of the mounting concept of the engine.

The substructure models for each mount, the electric engine, and the TMB have been obtained using DIRAC. The virtual point component models have then been substructured into one vehicle assembly. This model was compared with validation measurements in the full vehicle for microphones and sensors mounted in the car. The substructured FRFs from the engine into the car where matching the validation almost perfectly. These FRFs were then used to calculate blocked forces for the interface between the engine and the mounts.

To generate high-quality component models, we used our measurement software DIRAC with the live connection to a PAK MK2 measurement system. This allowed to make all virtual point models “first-time-right”, as all needed quality information is available live and any measurement errors could thus be identified and resolved right away. As the project concerned a benchmark vehicle, CAD geometry was not available from design. Instead, 3D scanning was used to generate STL geometry files as the import for DIRAC. This can be seen in the screenshot below. 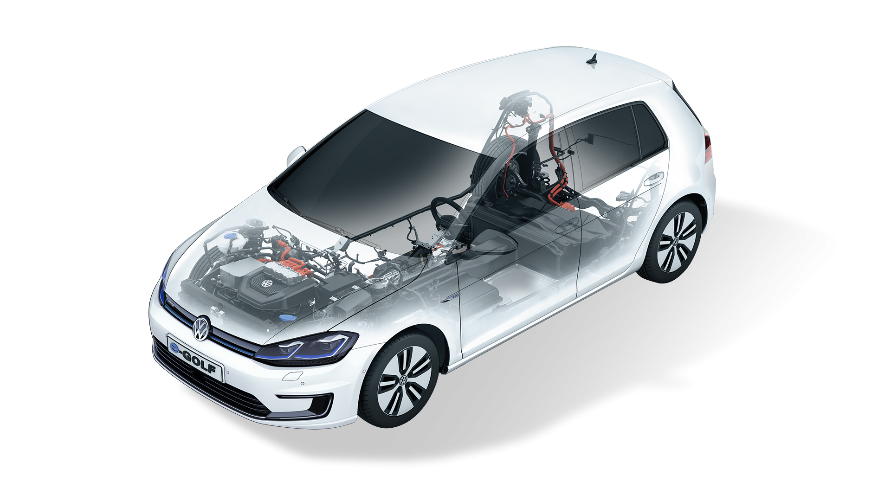 E-Golf with schematic display of the electric drive train with the E-Motor in the front. 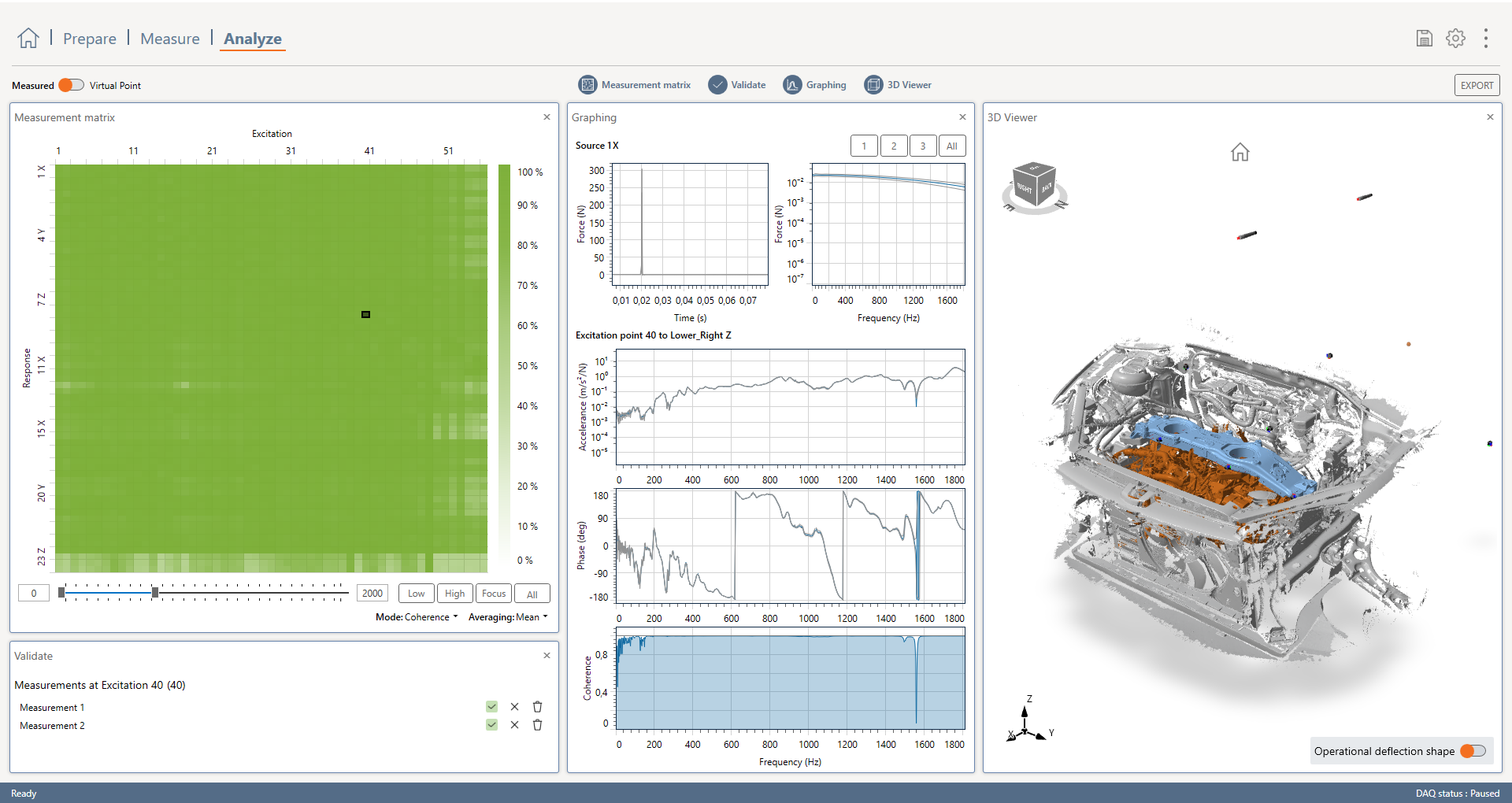 The E-Golf measurement in DIRAC. The matrix viewer shows the mean coherence in the frequency band of interest. 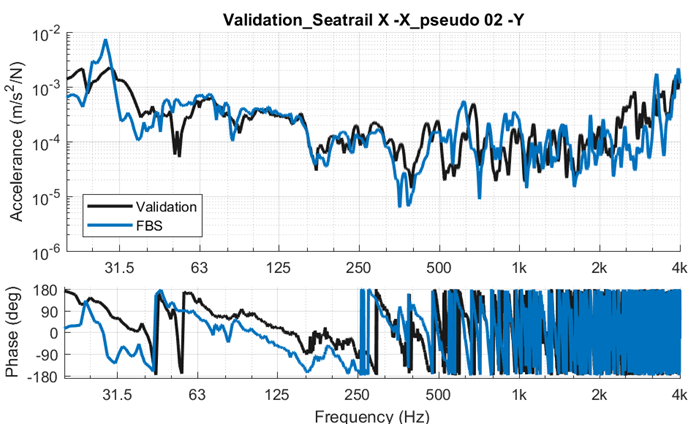 Result of substructuring of the test-based motor, rubber bushings and trimmed-body.

The combination of DIRAC, the VIBES Toolbox for MATLAB and the virtual point technology which is used in both programs makes the coupling very fast and efficient. Because of the flexibility in our calculation process, it was possible to provide insights into the different sub-models directly after measurement. For example, we were able to show the mount characteristics of the three rubber bushings linking the engine to the vehicle body accurately up to several kHz.

Blocked forces from a substructured model

Obtaining blocked forces form a substructured model was something completely new and was probably never done before. From the operational measurement on the dyno, we were able to calculate blocked forces with the FBS model and make predictions for sensors and microphones mounted in the car. The validation of these predictions showed a successful determination of the blocked forces and confirmed once again the high quality of the substructured model. With the validated model, we were able to virtually install different mounts and show the influence of the bushing stiffness on the sound and vibration transfer into the inside of this car.

The succesful application clearly proved the value our proposed methods and software. With our software products, DIRAC and the MATLAB Toolbox, Magna Steyr will now implement frequency-based substructuring and blocked force Transfer Path Analysis in their engineering processes and will be able to easily apply our methods themselves to make the development quicker and more efficient. The complete project was finished within two months from the start in October 2019.