Due to the lack of “masking noise” from a combustion engine in electric vehicles, the noise of auxiliary components is becoming a relevant topic. One of these components is the electric air cooling compressor (ELAC). In addition to temperature control of the vehicle interior, the ELAC also performs tasks such as cooling the battery and power electronics during operation and especially fast charging.
Throughout industry, one can observe different mounting concepts for e-compressors. In the presented case, the component is rigidly mounted with three connection points to a bracket. This bracket is again mounted with three rubber bushings to the E-drive.

The main goal is the characterization of the ELAC by a set of blocked forces, projected to the center of gravity (CoG) of the ELAC. For the calculations, a six degree of freedom (6DoF) Virtual Point (VP) is placed in the center of gravity. Two different methods were used to calculate the blocked forces.
The determined forces were used for the synthesis of the structure-borne compressor noise at a structural response point and on the drivers ear. The goal of having two sets of blocked forces for the same operational states is to prove the transferability and overall robustness of the characterization. 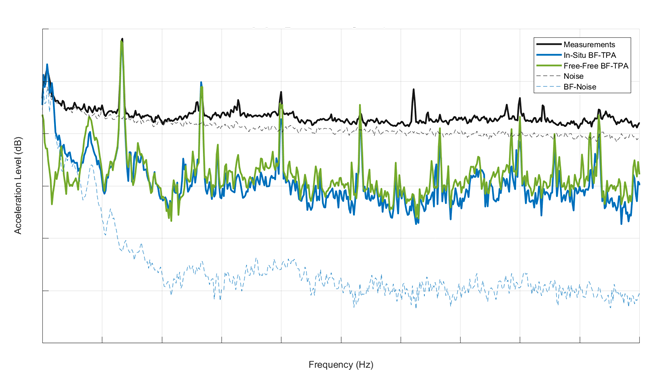 Comparison between the measured signal and the predictions from the blocked forces obtained from the freely suspended condition (green) and the mounted condition (blue).

Both used methods yield the same result, which means that the blocked forces are indeed independent of the testing conditions. This is even true for very different boundary conditions, meaning that the ELAC characterization is not affected by the mounting condition. It was also verified that the individual blocked forces show a high similarity between in-situ and freely suspended configuration. This finding gives the automotive OEM and supplier(s) freedom to choose the most effective characterization method.

The benefit of SOURCE

Dynamic Substructuring (DS) can be used to simulate modular transfer path models. Together with the blocked force source description identified by SOURCE, new isolation/packaging concepts for the compressor can be studied for new platforms and vehicles. This allows to create virtual acoustic prototypes of assemblies without the need to physically build them. Variants, for example different bushing stiffnesses, can be virtually exchanged and evaluated. This saves a lot of time and work in the development phase and could avoid late-phase troubleshooting.