German engineers Philipp & Ron about their work visit to Delft

Two of our German team members, Philipp and Ron, usually work as Project Engineers for VIBES in the Munich office. However, they were invited to work at the Delft headquarters for two months, to also get a taste of the Dutch vibes.

VIBES currently has two offices, one in Delft (the Netherlands) and one in Munich (Germany). This gives us a lot of flexibility. Not only in being close to our research partners and clients in both countries, but also regarding to workplaces. All of our team members, both Dutch and German, can choose to work in the office, or from home. By using Teams, people at VIBES can work anywhere.

Although this technology allows us to meet digitally with the whole team (and we do, once a week to discuss big updates), it’s always good to meet all team members in person and to experience the workflow of other parts of the company. Therefore everyone who works in Munich is invited to a work visit in Delft. This time it was up to Ron (working at VIBES for a year) and Philipp (started working at VIBES a few months ago). We prepared two desks and invited them over to Delft.

Our office manager Annika supported them in finding accommodation options for their stay. Ron choose to stay near the beach in Den Haag and Philipp (who by the way also brought his girlfiend over for a few weeks of vacation) prefered the old inner city of Delft.

Since I like to travel, I didn't think twice and took this opportunity. And this experience exceeded my expectations!

Besides getting to know the Dutch team better, Philipp and Ron could also gain deeper insights on software development, as VIBES’ entire division of software development is based in Delft. Where in the Munich office project engineering and sales is leading, in Delft the measurement hardware and the video studio are found. Ron and Philipp improved their practical skills by performing measurements with the PAK MKii system (data acquisition hardware) in the Delft office. Ron is one of the engineers that has worked the most with SOURCE, so he could provide valuable feedback to the developers of SOURCE, located in Delft. Philipp on the other hand dived into the methodology, by working on a research topic about characterizing the mass unbalance of compressors via blocked forces. As the compressor is a relatively simple component, it was a great example to perform some studies. At VIBES we gained valuable new insights because of this research.
And as for the video studio: Ron picked up the ins and outs of making vlogs and tutorials and made a lot of new content for VIBES!

The time spent in Delft makes the two offices seem much closer together. And for me the interdisciplinary exchange with the software team was really exciting since this is what VIBES is about to me – transferring engineering into software. So it was a lot of fun to design some tools & features together with the guys.

Sounds already like a worthwhile trip, but when we asked them about their experiences in Delft, they immediately referred to the outstanding bike paths and the nearby beach as big plusses of their stay in the Netherlands. Not to mention the loads of typical Dutch dishes they enjoyed, such as bitterballen, appeltaart, croquettes with mustard, and fries with mayonnaise. Speaking of tasting the vibe!

I especially liked downtown Delft with all its beautiful canals, traditional buildings, and cafes. But during my stay I also visited the surrounding cities like The Hauge and Rotterdam, which are absolutely worth seeing and only a few minutes away by train. 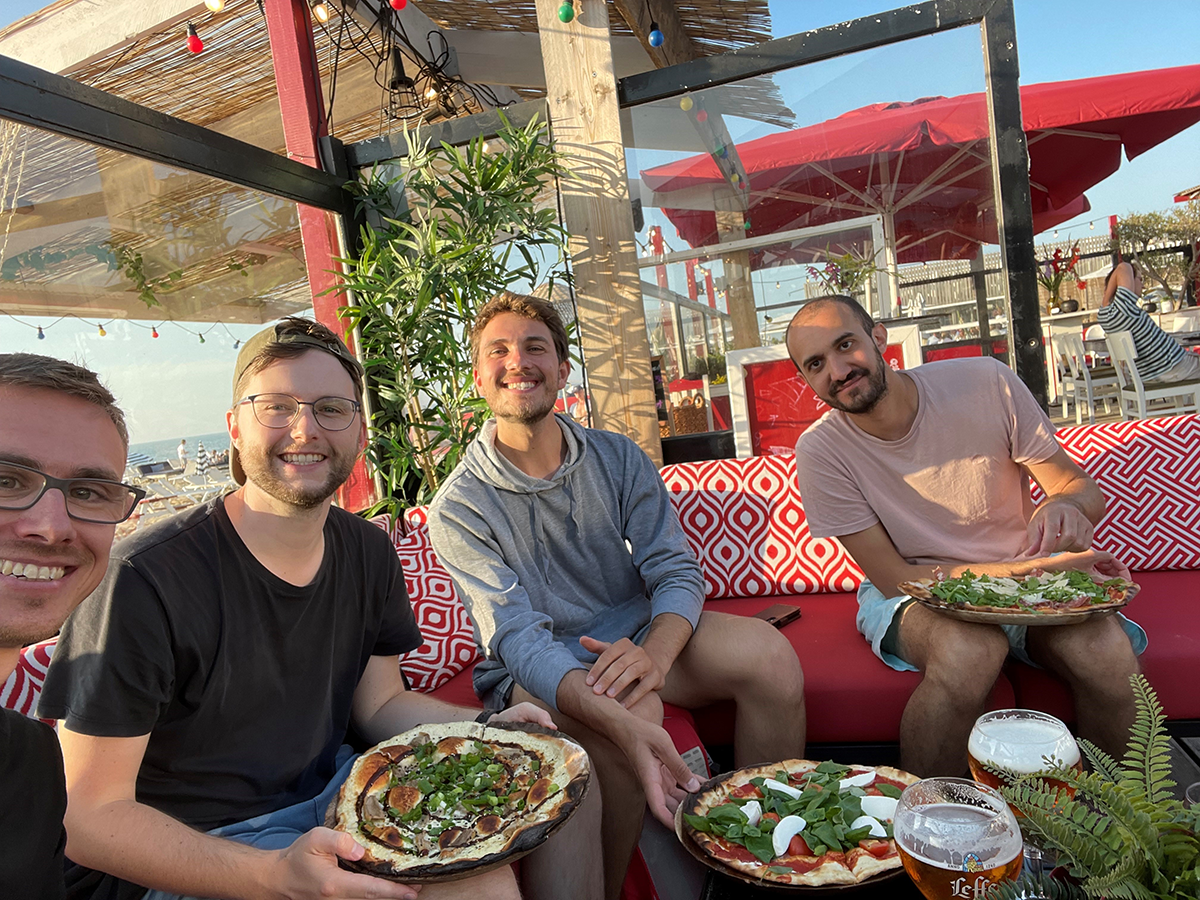 Dinner at the beach. From left to right: Manuel, Philipp, Ron, Constantinos 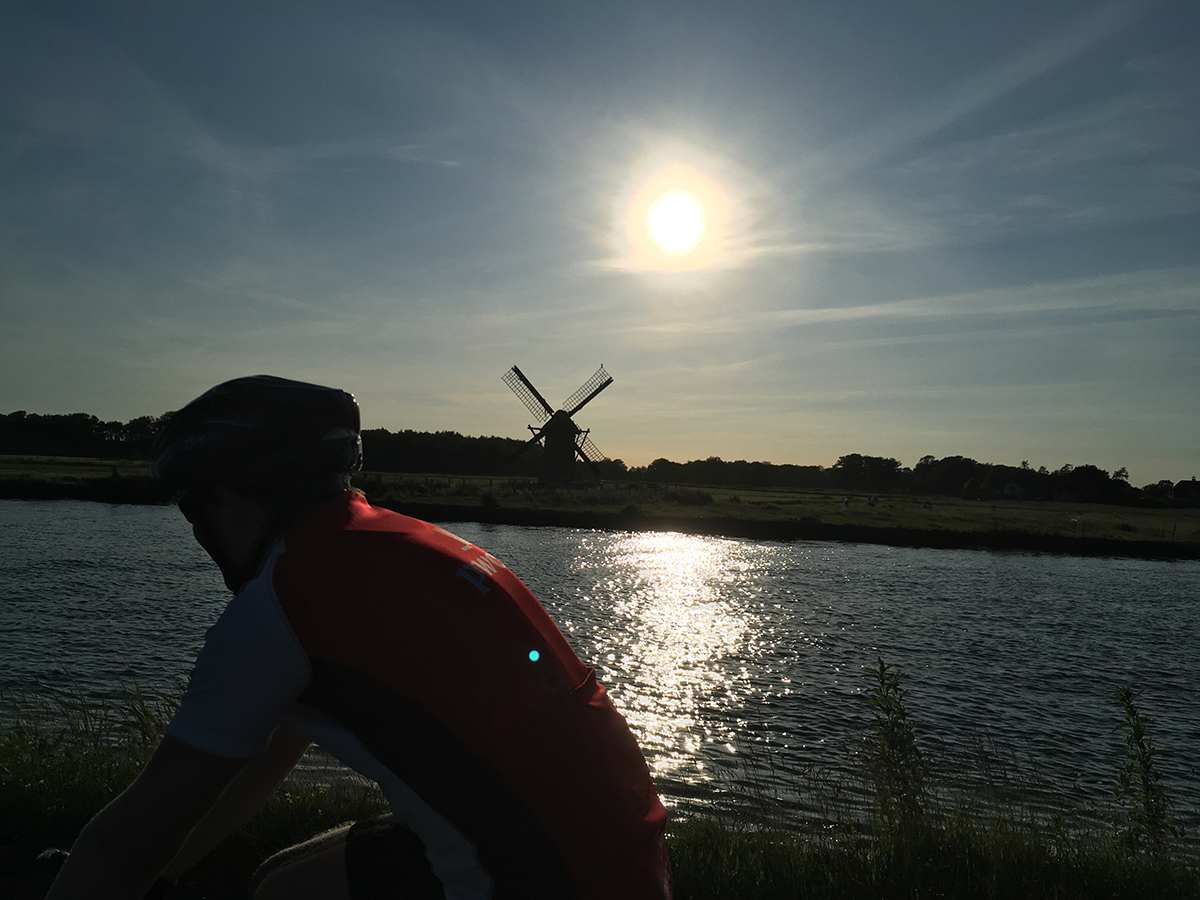 Ron discovering the region by bike

As the icing on the cake (or should we say, the mayonnaise on the fries?), Ron and Philipp got to experience the first prototype of the Lightyear One.
Like mentioned before, at VIBES we boost the interaction between all team members. An annual joint VIBES team event should therefore not be missing. Coincidentally, the event took place during the period that Ron and Philipp were in the Netherlands. The rest of the German team also joined us and together we visited Lightyear in Helmond. A fine example of Dutch innovation and only to be seen in the Netherlands (yet)! 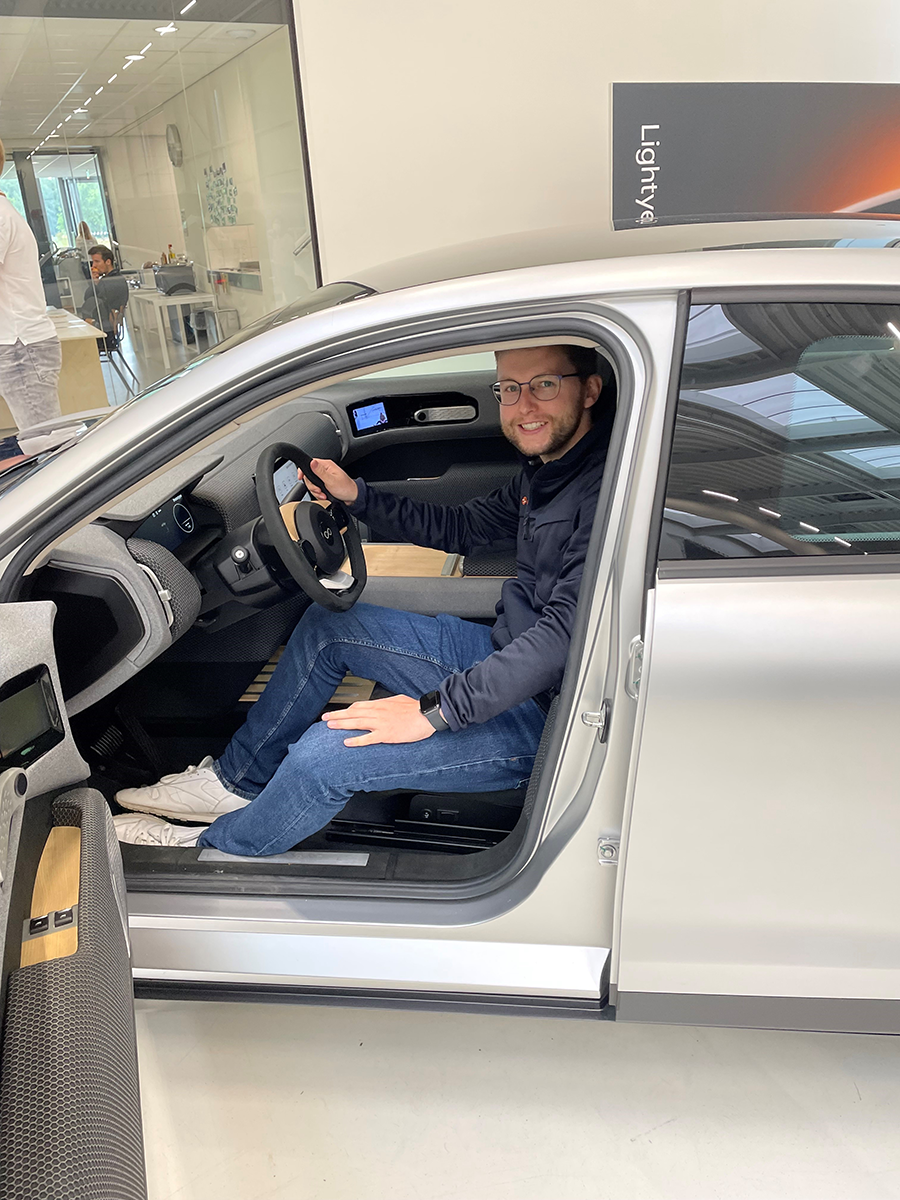 Philipp in the Lightyear One

Bringing the vibe back to Munich

Ron and Philipp went back to Munich happy and with a lot of new knowledge and experiences. See you back soon guys! Actually, next Tuesday for the weekly digital meet up with the whole team 😉

Ron graduated as MSc at the TU Munich. There, he focused on structural dynamics and experimental analysis of dynamical systems. For his thesis project at the BMW Group, he worked on a Virtual Acoustic Prototype using TPA and Dynamic Substructuring.