How it is like to move abroad for a new job: the stories of Manuel and Eleonora

You might know that VIBES is a very international company; we have about 9 different nationalities onboard! However, most of our team members already lived in the Netherlands or Germany when starting working for VIBES. This is not the case for Manuel and Eleonora, who moved from Germany and Italy to join our team in Delft, respectively as Software Engineer and Business Developer. Why did they choose to move, and how has their adventure been so far? Let’s figure it out!

Why the Netherlands? And why VIBES?

For both Eleonora and Manuel, it was time to start a new chapter of their lives. Eleonora had just finished her “student life” and it was time for her to begin a professional career.

It was an easy choice. I have done my master’s degree in aerospace engineering in Delft, and during that year there, I fell in love with the Dutch way of living and the Netherlands itself, and I understood that that was my place. So, after graduating in July 2020 (from home in Italy), I decided to look for a job in the Netherlands.
- Eleonora -

For Manuel, it was slightly different: the company he worked for was acquired by a larger organization, and the new owner decided to close the business he was working in. Therefore, Manuel took the opportunity to move closer to the sea (at biking distance!) and work in the Dutch culture, with which he already had good experiences. 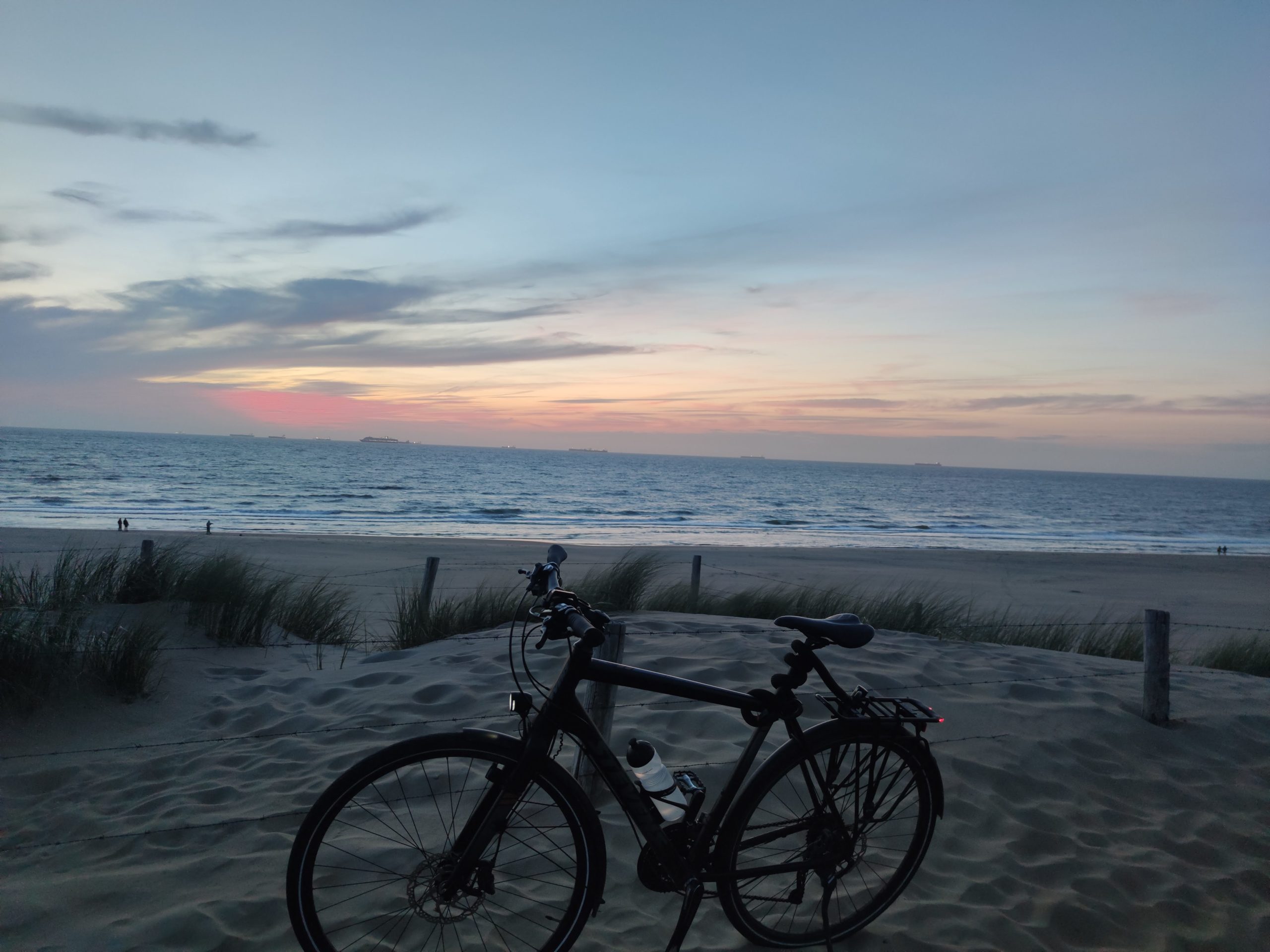 Both Eleonora and Manuel came in contact with VIBES through LinkedIn. Eleonora was asked to apply for a position through a LinkedIn InMail from Maarten van der Kooij (CEO at VIBES); in Manuel’s inbox, the VIBES vacancy was promoted in a Job-offer Newsletter from LinkedIn. After discovering that the match was great and that the vibe felt right (and that it was close enough to the beach 😉), they both accepted the job offers. Interestingly enough this was all during COVID times, so they had not even seen the office or their colleagues in person when accepting the offers!

The moving and living

Even though it was during COVID time, the moving went pretty smooth. After staying in an Airbnb for 10 days to quarantine, Manuel could not easily find a house, so he stayed a bit longer in his temporary accommodation:

Since the decision to move to the Netherlands was very spontaneous, I arrived in Delft without having an apartment, so I stayed in an Airbnb for 6 weeks!
– Manuel –

Finding a nice apartment in the insane housing market of the Netherlands is a bit of a headache issue. Luckily our Office Manager Annika was there to help.

The agency required someone to visit the place beforehand, so I asked if someone of VIBES could go on my behalf (since I was still in Italy), and Annika did it, even though we had never met before!
– Eleonora –

Also, the first months in the Netherlands were not the most exciting due to the lockdown that was there at the time. However, the colleagues at VIBES were very welcoming (although contacts took place mainly virtually), and the lockdown did not affect the possibility of practicing hobbies. Eleonora loves cooking, so she spent her free time practicing new recipes while Manuel was always on his bike, discovering new paths and cities. Manuel even started a small bike workshop in his living room (which saved VIBES’ members multiple times).

Then, after the first few “boring” months, summer arrived, and measures got reduced, and they could start exploring the surroundings and enjoying some social life! 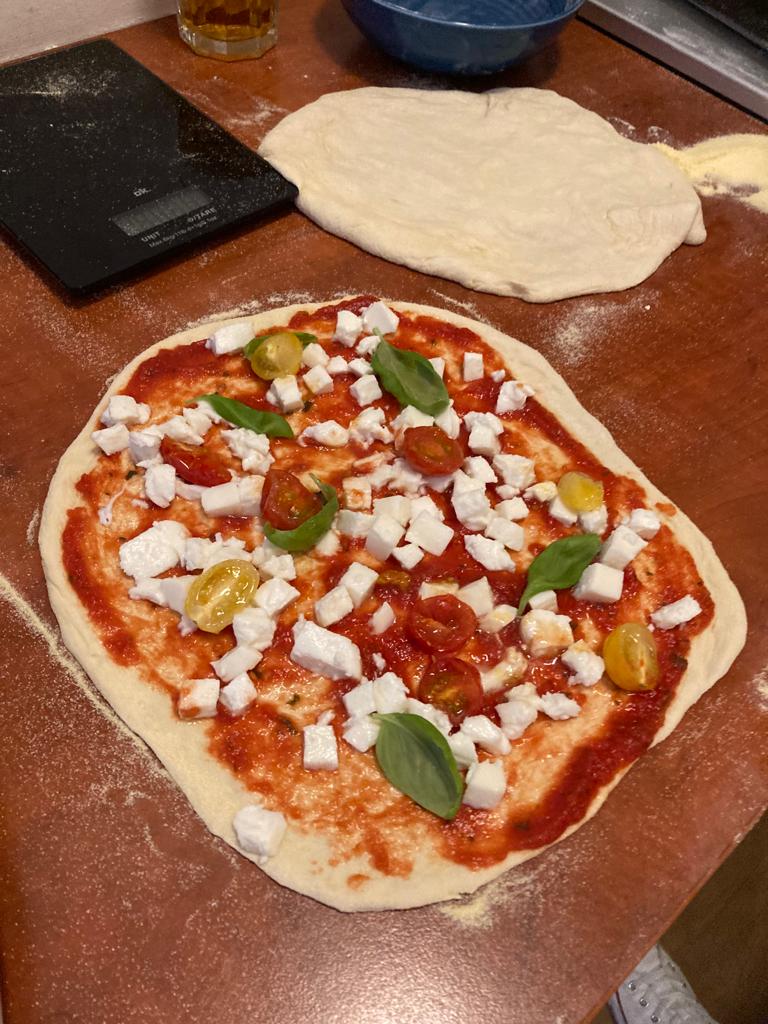 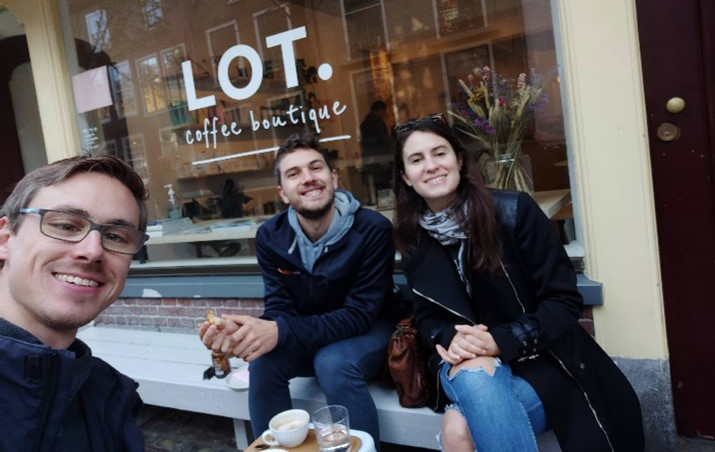 From left to right: Manuel, Ron and Eleonora

The first months at VIBES

These digital introduction coffees helped to give a face to the names, to understand who does what, and to get to know more about their personality and story. I loved it!
– Eleonora -

Like everyone else at VIBES, Eleonora and Manuel got introduced to the technology by doing some tests on a rubber mount. They prepared the design of experiment, and then they did some impact tests using DIRAC. 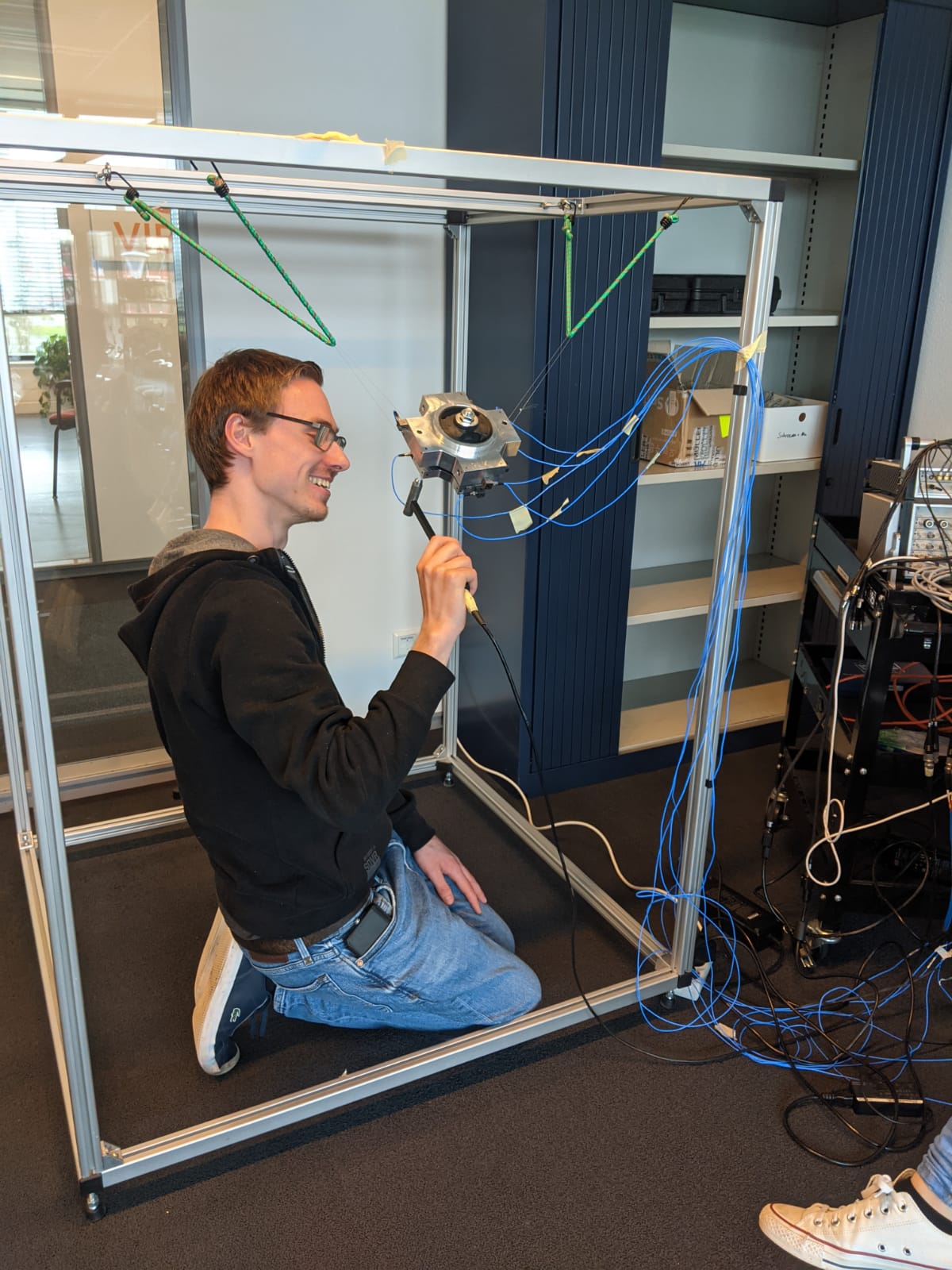 In the first weeks of the new job, they both had to learn a lot to catch up, which was challenging. As a Software Developer, Manuel could already pick up some tickets to work on after only a couple of weeks. One of his first tickets was improving the ATFX-file reader, which is a key element in both DIRAC and SOURCE. For some files, the import could take up to 30 minutes! After about a week of working on the ticket, he managed to reduce the maximum time needed for the import to just 7 seconds!

Manuel has become a firm part of the software team and is really pushing to make VIBES software better and better. He is now the expert on communication between the hardware MKII (of our partners of Müller-BBM) and our software DIRAC. He even has one of these systems (we call her “Bertha”) standing next to his desk! He also supports VIBES customers every now and then.

Some time ago, I handled some support tickets of BMW. My skills as well as the fact that I am a native German speaker were a great help!
– Manuel –

Eleonora has spent much time in her first month learning about NVH and, in particular, the VIBES methodology, reading the PhD thesis of Maarten van der Seijs multiple times. During these learning months, Eleonora created a summary document for herself to keep track of all the freshly gained knowledge (resulting in 80 slides in PowerPoint!). All new employees are now using this document to get up to speed.

In the past year, Eleonora has gained some experience in NVH, thanks to working on projects and doing research. She is now responsible for a selection of VIBES’ customers and the VIBES software licenses. One of her first memories is a meeting with some Japanese customers.

I was surprised how different this meeting was compared to those that I had with European customers. The approach was totally different because of cultural customs. For instance, I did not know when I could leave the meeting since everyone kept thanking and bowing!
– Eleonora -

Eleonora writes proposals and quotations for both software and consulting projects. She closely collaborates with the project engineers to ensure that the best technical approach is chosen for each case and with the software developers for license-related topics. She is also working on side activities. For example, she was part of the team developing the VIBES Academy.

The Dutch, their culture and the Netherlands

After about one year in the Netherlands, what do they think about the Dutch and their culture?

Both Manuel and Eleonora are in love with the Dutch attitude. The Dutch are direct: whatever the Dutch think is quickly expressed in words without much filtering. In the beginning, this might sound slightly frightening, but after a few weeks, you just get used to it and even start to appreciate it. Both Manuel and Eleonora also love the Dutch because they are the most open-minded, relaxed, and easygoing people they have ever met.

The culture is just so different than the Italian one. I still find it funny to see people in their pajamas and wet hair at the supermarket or students taking the table out on the sidewalk during the sunny summer days and having dinner out there! Once a student house also had an inflatable swimming pool next to the street! I love them!
– Eleonora -

Another great thumbs up for the Netherland is that the whole country seems to be built for bikers: you could reach nearly every place by bike and every street has its own bicycle lane.

It is really impressive that as a cyclist, you nearly never have to stop somewhere: the traffic lights often change to green even before pressing the button, and cyclists have the priority!
– Manuel –

The only disappointing thing (both Manuel and Eleonora agreed) is the Dutch weather. It can rain for days without stopping, something you don’t wish for when commuting by bike. However, you still see the majority of the Dutch jump on their bikes anyway.

It keeps amazing me why they do this, but my colleague once gave me the most Dutch possible answer “Ik ben niet van suiker!`` (I am not made of sugar!).
– Eleonora - 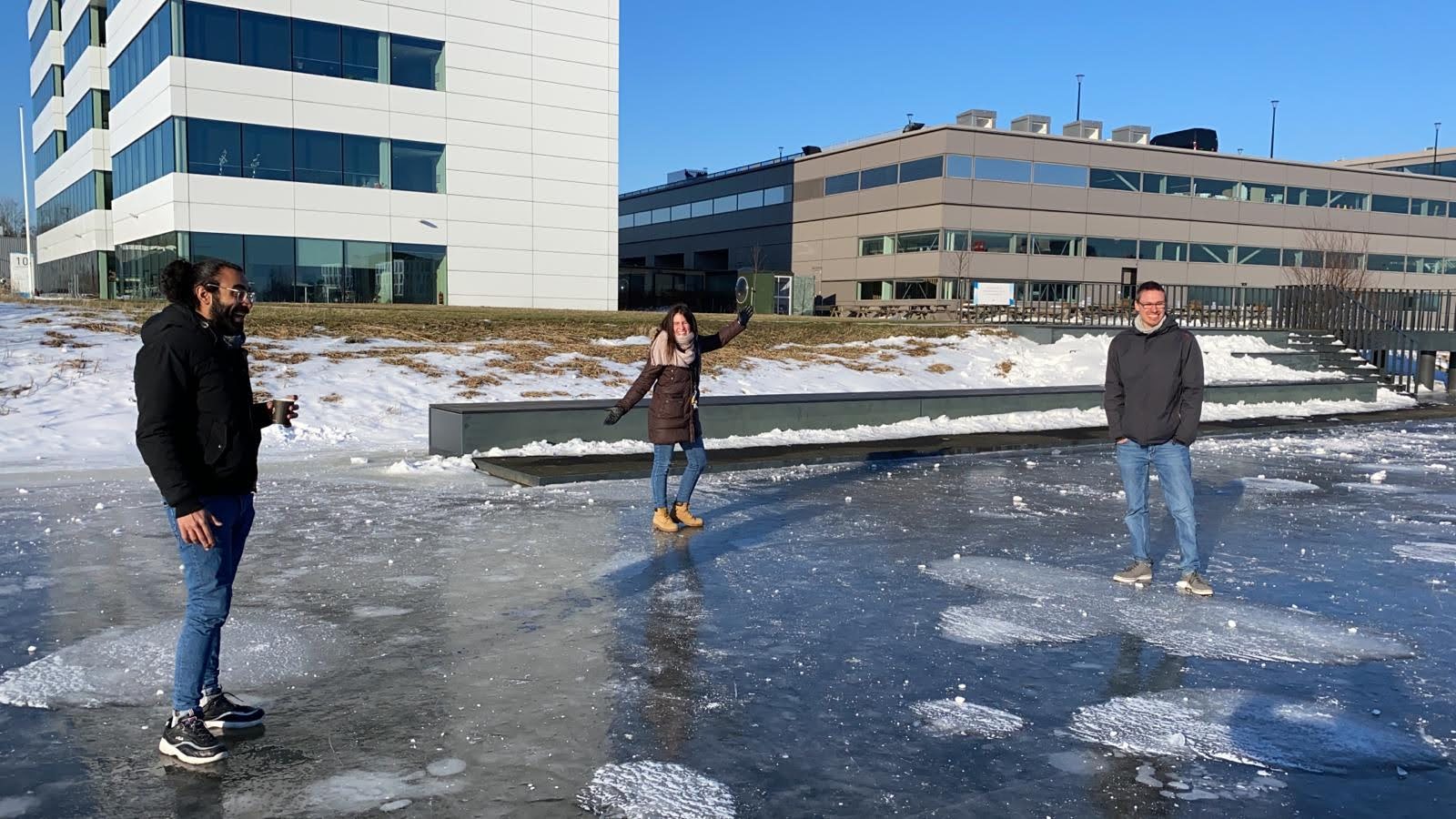 When the temperatures drop below zero, the Dutch happily practice their ice skating skills on the canals

And what about the language, is that a barrier?

Not at all. Everyone in the Netherlands speaks perfect English. When talking to people, they immediately switch to English.
– Eleonora -

And that is the reason why neither Manuel nor Eleonora has learned Dutch yet. They both started to use an app to learn the basics, but stopped after a few weeks: Dutch is unnecessary when working in the international environment of VIBES and when living in the Netherlands. They both wish to start one day again to add Dutch to their language list.

So, what are you still waiting for? Send us your application!

Manuel works in the software development team at VIBES. He holds a BSc in Scientific Programming from the FH Aachen and a Mathematical & Computer Science background and a lot of practical experience.