The VIBES License Manager is a tool created by VIBES in which multiple information and actions on the licenses of VIBES software can be visualized and performed, such as:

To open the VIBES License Manager to start the VTM, you can watch the video in 1.1 About the Toolbox for MATLAB, or read the following paragraphs.

To open the VIBES License manager, you have to follow the next steps:

Floating licenses in the server and in the session

In the Licenses on server window, it is possible to visualize all the VIBES Toolbox licenses present on the server. Here, it can also be seen how many of those present on the server are available and their expiration date.
The Available licenses window provides information on the available licenses in the machine for the current session. To acquire licenses for a session, they need to be pulled from the server (the process is explained in the following paragraphs). If they do not get manually returned, they will remain in the machine for a certain amount of time, after which they will be automatically returned to the server. The date on which they will be automatically returned can be seen in the Expiry column.

Important! For all the sessions, at least one license must be pulled! 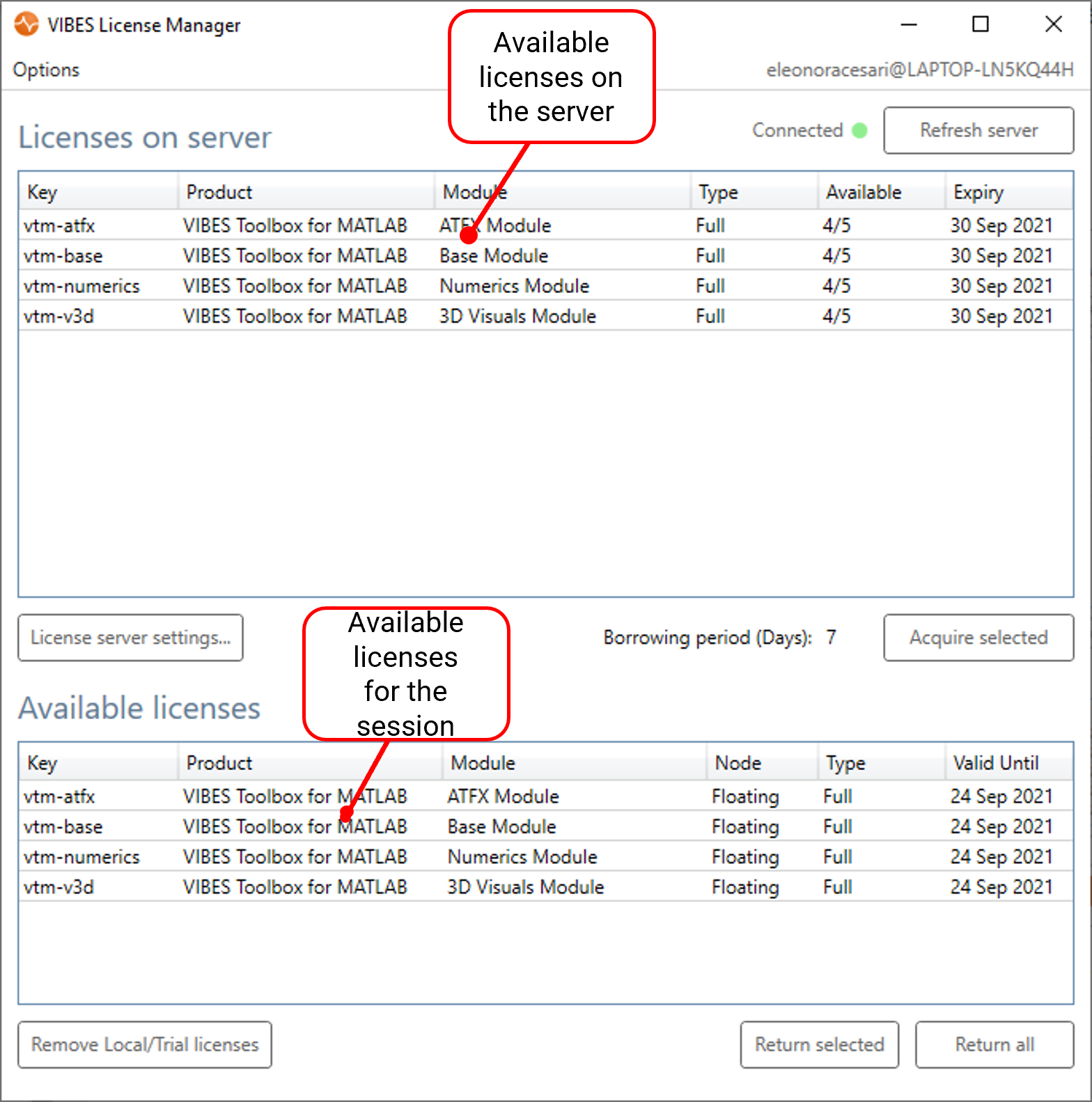 VTM licenses on server and in the session

To activate floating licenses, it is first necessary to enter the credentials of the cloud server and then to acquire the licenses.

The credentials for the cloud server are usually contained in a .config file and they need to be entered in the VIBES License Manager. This process can be done following the next steps:

If you do not have the .config file but have the server credentials, you can manually fill them in. In this case, steps 1 and 2 of the above procedure must be performed, and then Cloud server URL, Cloud server id, and Cloud server password must be filled (after selecting the correct license server type).

Important! Pay attention to the checkout policy of the licenses. Licenses can be returned automatically or pulled for a longer period of time on the local machine (more details in the following paragraphs). 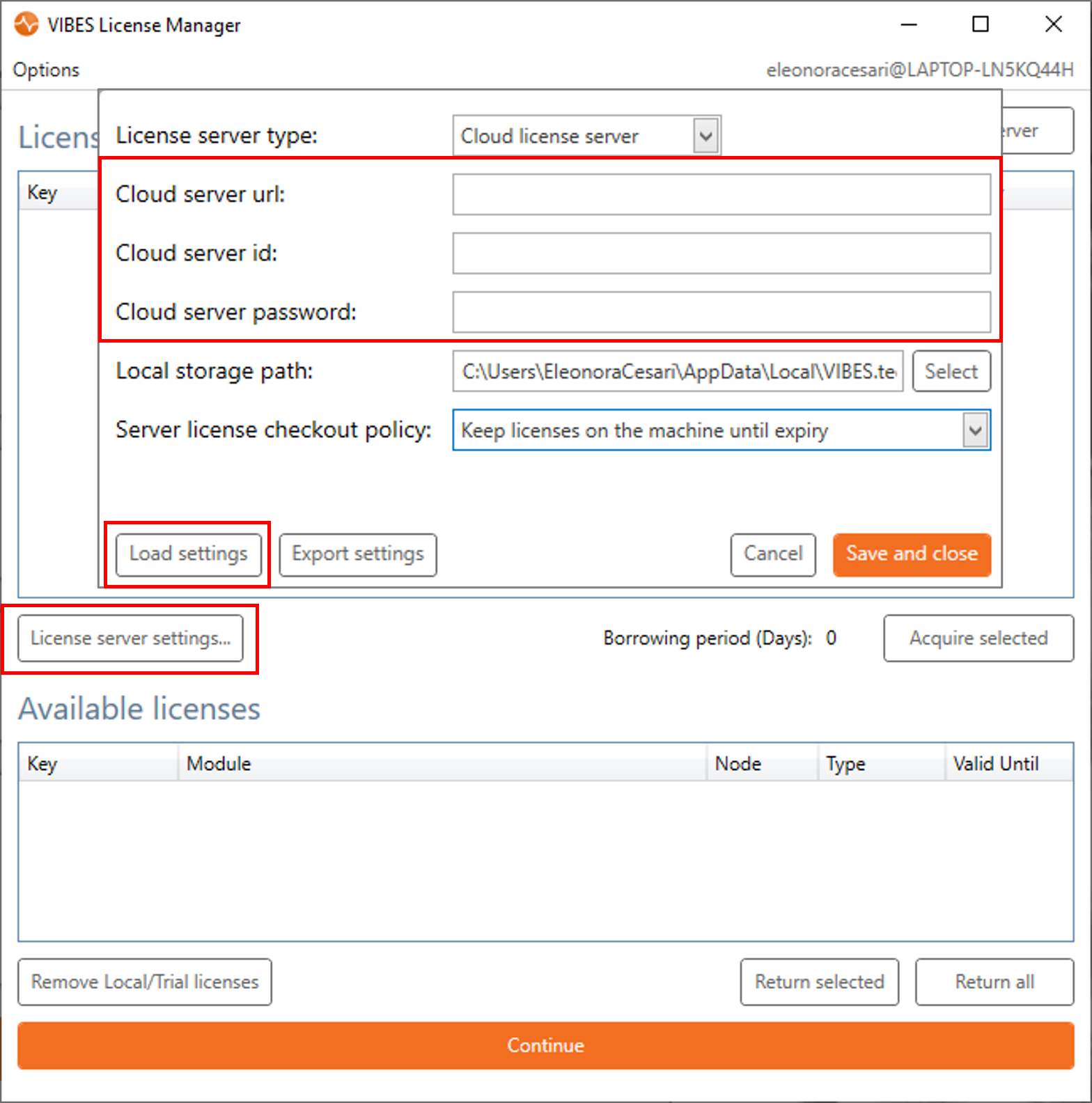 To acquire floating licenses on the machine to use them in a session, follow the next steps. For all the sessions, at least one license must be acquired. 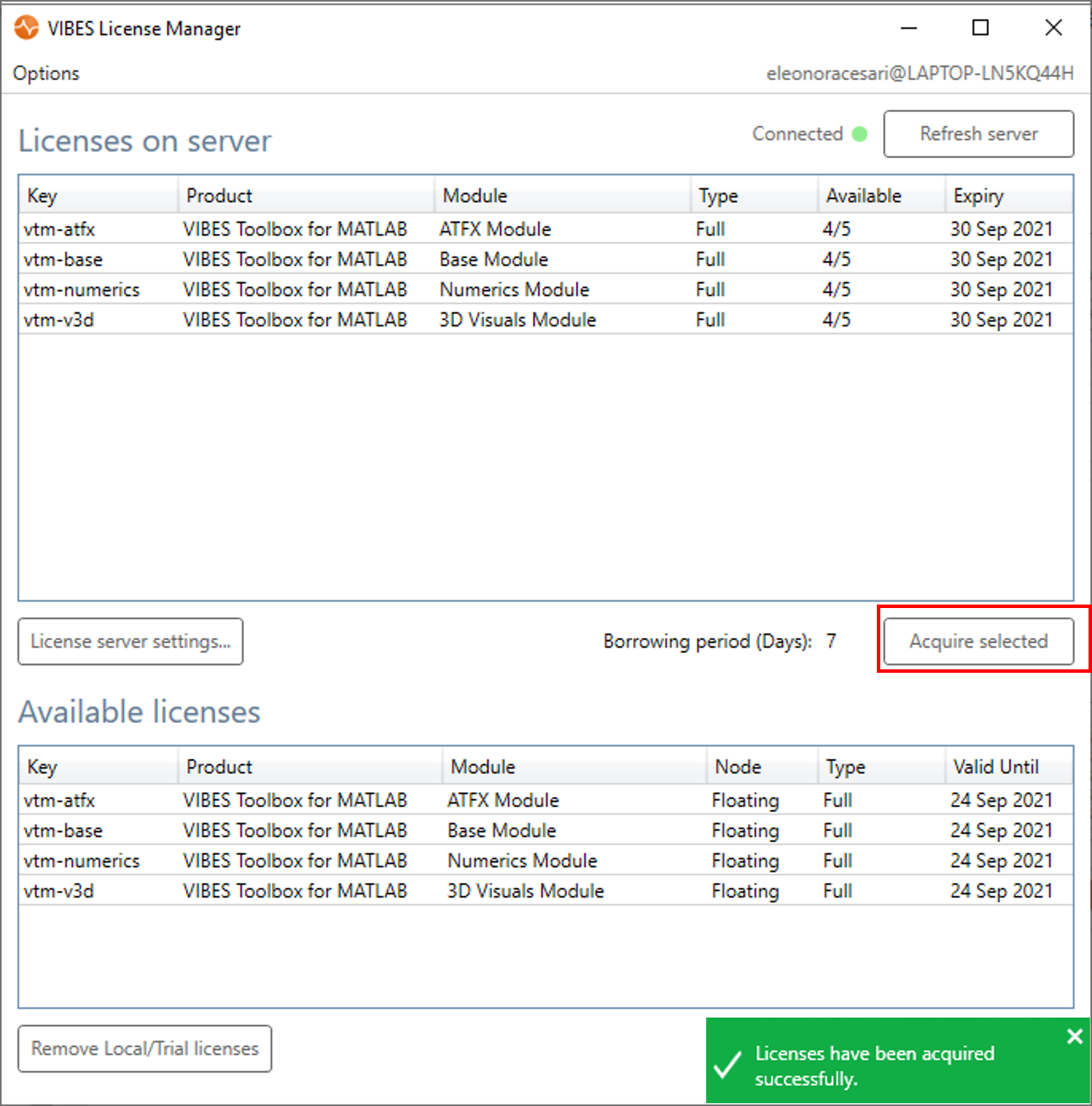 When acquiring floating licenses from the server, it is possible to set the borrowing period. This corresponds to the period of time that the licenses will be kept on the machine from the moment they have been acquired. By default, this period is set to 7 or 14 days (unless a different period has been decided when requesting the licenses from VIBES). However, it is possible to change it in Borrowing period by typing the number of days.

When opening the license server settings, it is also possible to select the server license checkout policy. This option allows you to choose the return policy of the license. It is possible to choose between two options: 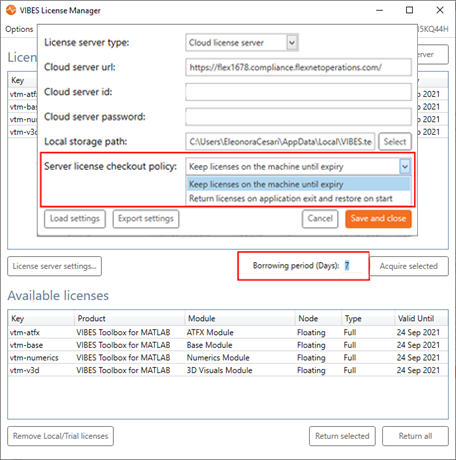 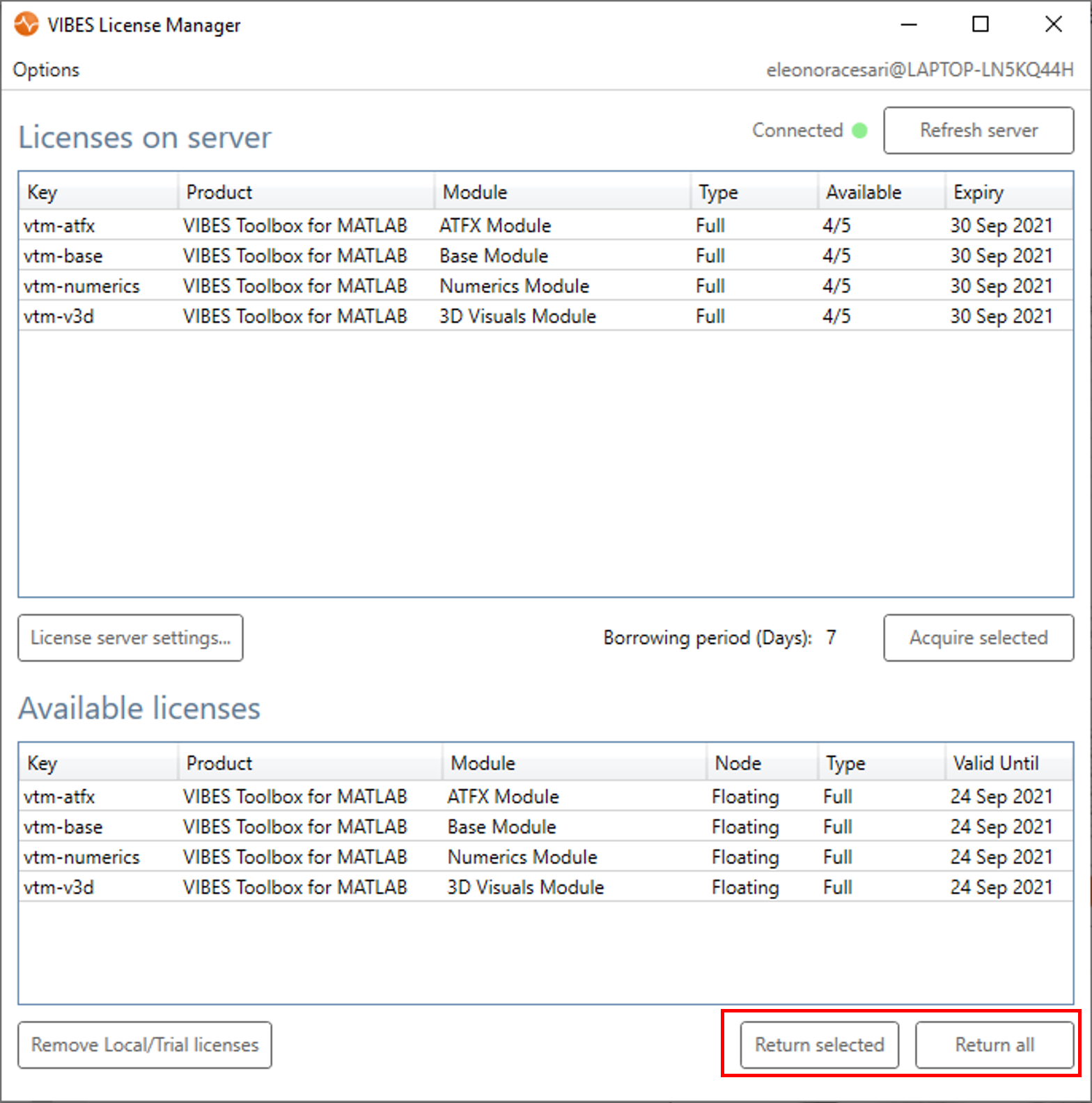 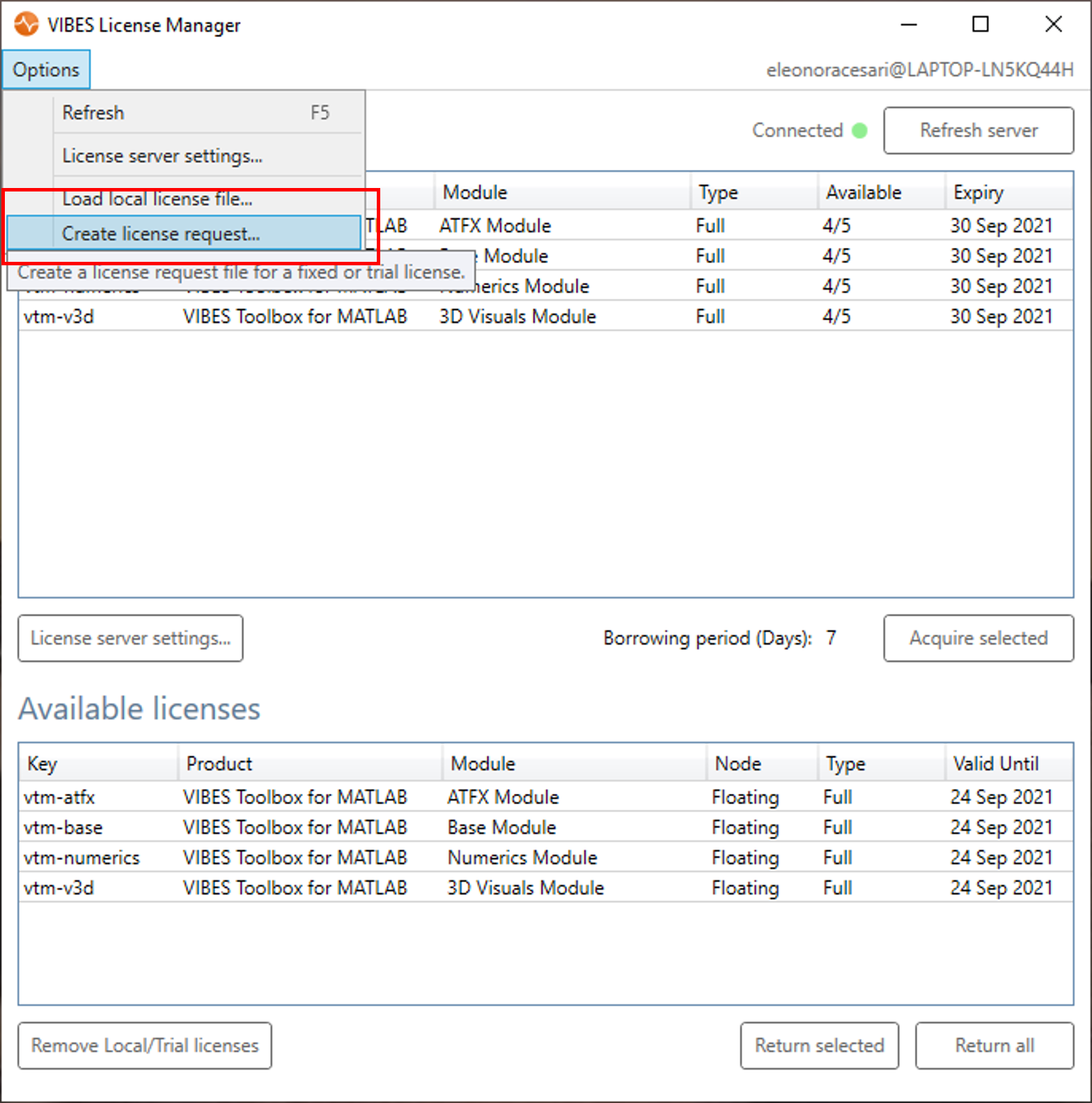 The licenses present on the machine can be visualized in the Available licenses window. 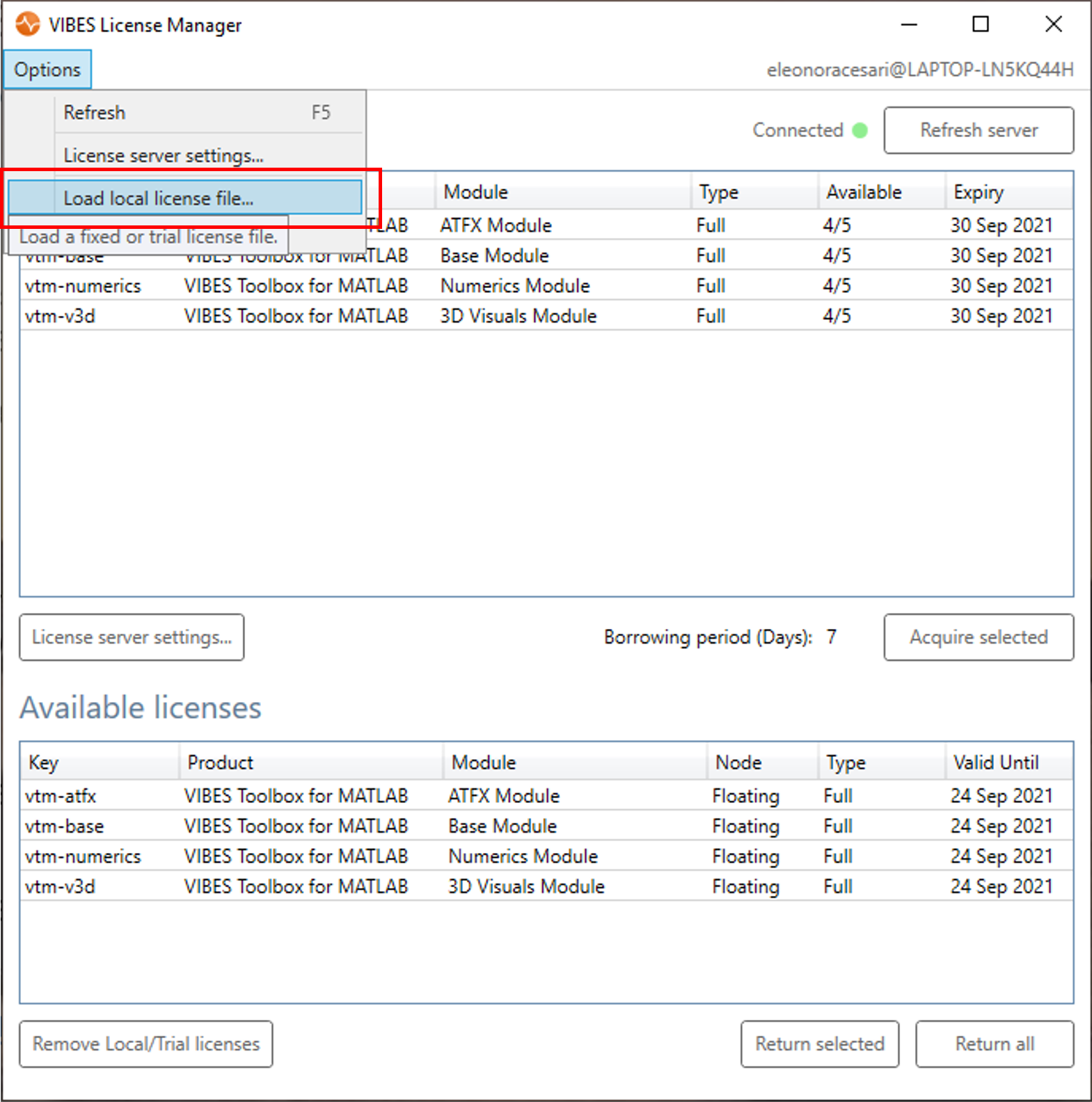 For general VTM support and questions regarding licensing, please send an email to: