In the Graphs card, the 2D and waterfall plots are visualized. In this card it is also possible to playback audio and create segments.

Operational data can be plotted in either 2D (time or spectrum) or waterfall plots. To plot them, right-click on the operational data of interest, select Plot and choose the type of graph desired. The plots will appear in the Graphs card on the right. For additional information and tips on plotting, see the section on 4 Plotting.

If the data has only been imported but not yet loaded, then plotting the data will automatically load it as well.

Showing geometries in the 3D Viewer

To visualize geometries you have to:

To animate the Operational Deflection Shapes you must complete these steps:

SOURCE will only animate operational channels that are set as Masters.

When animating Operational Deflection Shapes, you can change the following settings in the taskbar: 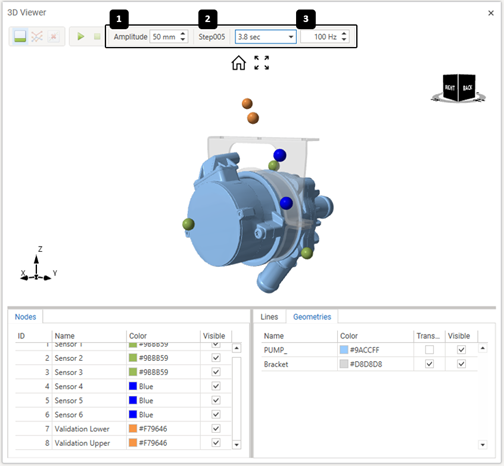 You can control the settings using keyboard shortcuts:

For 10 units increment or reduction, use the shortcut CTRL + SHIFT + key.

You can create a mesh between nodes to visualize the Operational Deflection Shapes better. The mesh is formed by lines that connect the nodes.

To create the meshes, you have to complete the next steps:

You can edit the lines’ color in the Lines tab.

In the Graphs card it is also possible to play the audio of your operational data. To do so, click on the green play symbol that you can find on top of the graph. The playback cursor will appear to indicate the position of the playback in the signal and the channel is played. In the toolbar you can also pause, stop, or change the volume of the playback. It is also possible to drag the playback cursor to the left and right within the plot to play the audio at a different instance in time.

If multiple graphs are plotted at the same time, you have to choose which one to play by selecting it from the drop-down menu in the toolbar.

In the audio playback toolbar, it is also possible to set values that correspond to the maximum volume. If the Abs feature is not activated, the maximum value of the plotted channel is used as the maximum level of the audio card.

If you want to compare different datasets, this setting could be misleading because, for all of the datasets, the maximum value of the plotted curve will be set differently, making the comparison impossible. To overcome this issue, you can tick the Abs box and define the value that corresponds to the maximum volume of the audio card. This value will be used for all the datasets that are played back. This value has to be defined in linear engineering units. 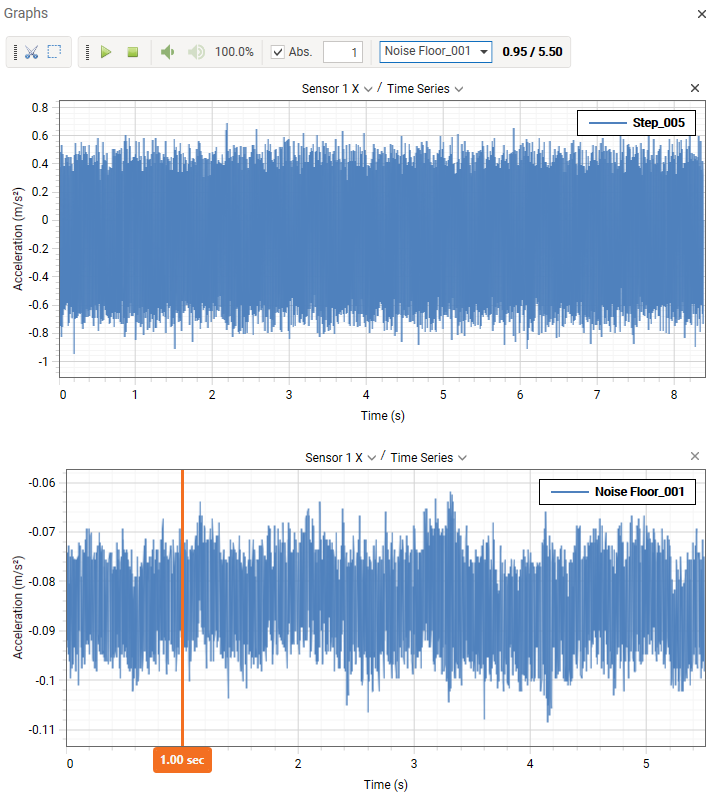 To export operational data, you must right-click on the dataset and select Export to and then choose the wanted file extension between ATFX, MAT and WAV.

Afterward, a window pops up asking if you want to export the file with the original channels or with the mapped channels only.

If you want to export a sequence, the different segments that are part of that sequence are first merged.